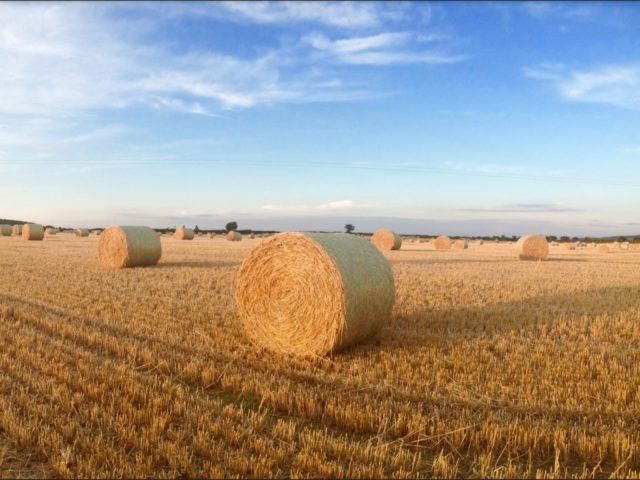 Harvest 2017 is well underway at this stage with harvesting kicking off in the middle of July. Weather has been fairly broken but there have been some good days in between and ground conditions are perfect.

Winter Barley is now mostly completed, and a considerable amount of Winter Oats and Oilseed rape have also been harvested.

Winter Barley has done pretty well, yield wise, in Laois with most crops ripening slightly later. The crops in Laois did not seem to suffer as much as some other areas of the country where they had much lower yields.

Most results seem to be in the 3.5/4 tons per acre compared to some areas where yields are back to as low as 2.75 tons per acre. Drought like conditions in the spring are being blamed for some of the poor results achieved in other areas.

Although weather has been a bit broken, moistures are anything from 15% to 20% and bushel weights are, from what I’ve seen, in the 63/68 range

Straw yields are generally good, with strong demand, 4×4 bales ex field making around €14/15 per bale or around €100 per acre on the flat.

Prices for grain are still flat and not good enough for a decent return. I have heard that some buyers are actively looking for Winter Barley but more money would need to be on offer than is currently being talked about.

Winter Oats seem to yielding well at 3/3.75 tons per acre which seems to be the general run. Bushel weights running at 52/57 and Gluten free Oats coming in at around 3.5 tons per acre.

Winter Oilseed rape is yielding well at 1.8/2.2 tons per acre and with forward selling at €380/400 per ton makes Oilseed a good crop this year.

While some very early sown Spring Malting Barley crops are close to harvest, the majority, especially April sown crops, are still about two weeks away. Most crops look good, but there has been lodging in some due to the recent weather.

Overall it’s not a bad start to 2017 harvest. While there seems to be a lot of yield variation nationwide, it would seem locally results are good. Straw demand is strong with all 2016 straw stock cleared, we should see a steady season for straw sales.

Hopefully Winter Wheat and Spring crops will perform well over the next few weeks, but we really need to see a big improvement in price, as where we are at the moment is simply far too low.