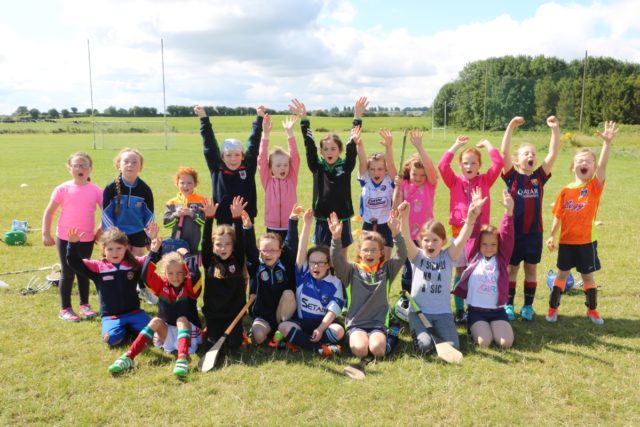 O’Moores Camogie Club hosted their own camogie summer camp in the Rock GAA Club from Tuesday 8 August to Thursday 10 August.

Over 60 girls took part in the three-day camp to develop their skills.

Promoting camogie in the area

O’Moores Camogie Club covers an area in north Laois traditionally dominated by football. They are making huge efforts to promote camogie in the area and encourage girls to play both football and camogie.

The Senior team have proven that success across both codes is possible. The senior panel that secured their first ever senior county title last year was made up of over 20 dual players.

The summer camp was organised to promote camogie in the area. It proved a huge success with club membership increasing and reaching its highest level ever as a direct result of the camp.

Laois Camogie captain and club co-secretary Rosemarie Bermingham gave a word of thanks to the coaches, who are senior club players who volunteered their time to coach at the camp and share their skills with the future generation of the club.

She also gave special thanks to Laois Camogie goalkeeper, Laura Dunne, who visited the camp and shared some of her tips and tricks with the children.

The three days were capped off with a presentation of goody bags, including a limited edition club sliothar, by the club’s dual county star, Alison McEvoy.

There was also a presentation of club t-shirts made to four ‘Camp Champs,’ children who were ere fantastic team players, showed exemplary skill and had fantastic attitudes over the three days.