Ballyfin Ladies Football club is a relatively new set-up who are hoping to win their first junior final after only three years of fielding a junior team.

We spoke to their current manager Stephen Duff about the history of the club, the work the players have been putting in both on and off the field and why their management have taken to wearing headphones.

“For years we had girls from the Ballyfin parish, playing with the lads team up until under 14 and then going into clubs like Portlaoise, Sarsfields and Timahoe. I remember growing up we always had Edel Gilligan, Martina Cripps and Rachel Conroy always playing with the lads, so it always made sense for us to start a team,” said Stephen.

He says their current winning form has been an accumulation of years of work. “The club was started by a small few people and was spearheaded by Timmy Heffernan. The adult team was just pipe dream up until 2014.”

“It’s a combination of the youth which has been worked on since 2010, and relying on girls who were playing outside the club to come back and play for us, as well as pulling a few more out of the woodwork.”

There is great hype around the team since the girls have reached the final, but Stephen says they’re not letting it get to their heads.

“After only 3 years in existence to be pushing for promotion is fantastic. But we cannot just be happy with where we are, we need to refocus now and give it all we have to push on. A final is just another game unless you win it. So until we win it, its just another game to us. We worry about the controllables, our own performances, our own demeanour, everything else is just noise at the moment.”

There are currently 34 players involved in the side, and Stephen is hopeful for the future of the club. 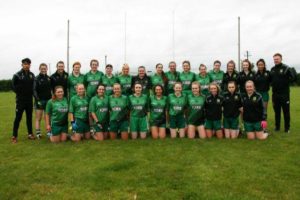 “With the strength of the underage teams in the club now, we expect the size of the panel to continue to grow and to see further success.”

Targets for the year

“In January we sat down and set out certain principles and targets for the year. One included going unbeaten at home for the year, which we achieved. Now that we have achieved that we feel that we have to target Ballyfin’s first ladies championship.”

The players have also been credited for their hard work both inside and outside of training.

“We vowed to be the hardest working team in the county. The girls do extra sessions themselves, and meet up once a week to do a 5km, or a gym session.”

It’s not only the team, but also the management who seem to be taking extra measures at matches. The managers now use headphones to communicate with each other up and down the sideline.

“The headphones are a new thing. I tend to get VERY involved in the games from the sideline. This system allows us to communicate with who we need to from wherever we are on the field. We also want to have a professional environment as much as possible.”

For now, the girls are just trying to focus on on the task at hand.

“The girls were always proud of being Ballyfin’s first ladies team, but I’ve asked them to forget about that now, and to be the first Ballyfin ladies team to be in an county final. Since that, we are now focusing on being the first team to win a county final for the club,” said Stephen.