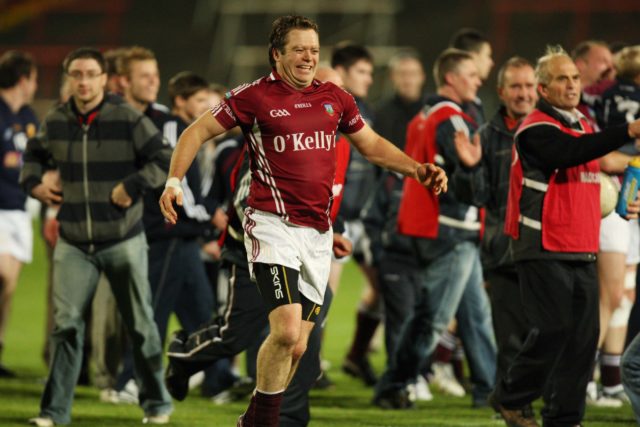 We’ve now had 16 games in the Laois SFC and the standard of most of the games has been reasonably high.

We’ve had close games, replays, big wins and massive shocks over the course of the last month.

There has been a number of young players who have shone too but at the backbone of almost all of the 16 teams in the Laois SFC is an elder statesman.

So to honour them, we’ve compiled a starting 15 of these fine men.

To qualify a player must have played at least one minute of senior football this year. And they must be over the age of 35 – ie if there was such thing as an U-35 team they wouldn’t be eligible this year. But keep at it lads – you could be in the mix in 2018!

There was serious competition for this spot – with three members of the Ballylinan parish vying for the number 1 jersey, Arles-Kilcruise’s Ken Kealy and Ballylinan’s Aidan Walsh both But Arles-Killeen’s keeper Mick Leigh has been excellent in both games, as he has been for number of years. The 37-year-old pulled off a number of fine saves and Killeen will be hoping he stays going for many years to come. He sees off Ken Kealy and Aidan Walsh for the spot.

Known as ‘Bam’, Kennedy played as a sweeper for Arles-Killeen in last year’s championship campaign where they reached the semi-final only to lose to Portlaoise once again. He featured in the opening round games against Portarlington but went off injured in extra time in the replay and didn’t play against Mountmellick.

The first member of the Conway clan to make an appearance on this team is at full back where Padge resides. He has been hit with injuries in recent years but started at full back against Killeshin and showed no ill effects as he got through the game. A serious servant.

An integral part of Ballylinan’s full back line for years, Dermot Leonard is still flying in a team with a nice mix of youth and experience. He has been rock solid in the defence of the team who have probably been the most impressive side after Portlaoise so far.

John Paul Conway thrived as a roving wing back when Arles-Kilcruise were at the peak of their powers around the end of the last decade. He’s now 39 and has been converted into a forward these days. But for this team we’ve brought him back into the backs.

Mahon is another of Arles-Killeen’s elder statesmen and one of the four members of panel who make this team. He has played a part in all three of Killeen’s games so far, mostly at midfield but we’re giving him the Number 6 jersey.

The former Laois player makes up an entire backline consisting of players from the Ballylinan Parish. Paul McDonald doesn’t play now as much as he used to – he’s now a selector – but he is always available when called upon and appeared from the bench in the defeat to Portarlington after extra time.

John Kealy, known as Baler, is a combative old style midfielder who still rules the skies every time he plays for Ballylinan. Kealy was a second half substitute in the win over Mountmellick Gaels and although he didn’t play against St Joseph’s, he will surely be involved again as the season goes on.

Fitzy won a Leinster title for Laois in 2003 as a wing back but he is still going strong as a forward for Portlaoise. His two appearances this year have both come from the bench and his experience will prove crucial as the Town attempt to win back the Jack Delaney Cup.

Bruno operates primarily in the full forward line for Portlaoise these days and he is as effective as ever. Had he not have been forced off early in last year’s county final with injury, perhaps Portlaoise might have won that coveted ten in a row. But he’s flying now again as the Town look to win it back.

Despite turning 39 recently, Chris Conway is still going strong for Arles-Kilcruise. He scored freely in both of his sides’ defeats to Portlaoise and Killeshin. Conway has given a huge service to Kilcruise and they will be relying on him to stave off relegation.

Greg Ramsbottom has three senior club championship medals in his back pocket and began this season attempting to win a two-in-a-row for the second time in his career. He won medals in 1997 and 1998 but there would be no double for Stradbally this year who will need Ramsbottom’s help to avoid relegation.

Not many players make their first senior championship start at almost 36, but that is exactly what James Miller did a few weeks ago. Miller played and scored for Clonaslee Gaels in the first round defeat to St Joseph’s thanks to their amalgamation with Annanough for this year. He was equally impressive against Crettyard Gaels in Round 2.

Eoin Delaney is a player who has been flying in the league for The Heath for the last number of years but then failed to get a chance to do the same come championship. But he rolled back the years to torment Stradbally in Round 1 and was directly involved in each of The Heath’s three goals and was excellent in their last outing against Graiguecullen also.

The fourth member of the Arles-Kilcruise squad to make this team is also a Conway. Brendan, a teacher in Ratheniska, started at corner forward against Killeshin. He is always liable to pop up with a point or two.