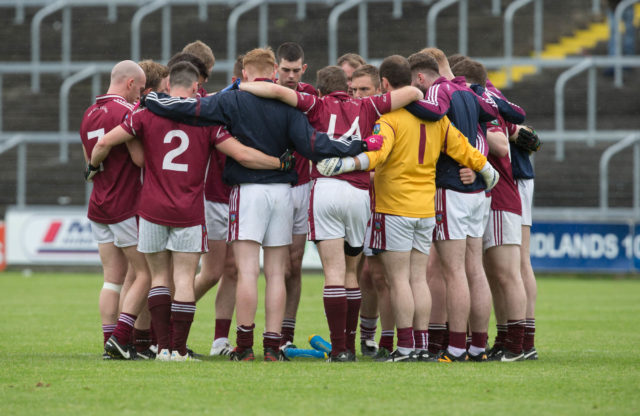 It’s the final that nobody wants to be in. This evening in Stradbally, Mountmellick Gaels and Arles-Kilcruise clash in the Laois SFC relegation decider, a game that will see the loser drop out of the senior championship and into the intermediate ranks for 2018.

For Arles-Kilcruise it could spell an end to their 17-year stay in the grade, one that peaked in 2003 with their memorable triumph in the final. Mountmellick have been senior since winning the intermediate in 2006, and they followed that up with semi-final appearances in 2007 and 2008 and a handful of quarter-final outings since.

But both sides are in a place now that they didn’t wish to be and are just 60 minutes from making the drop. And since losing their relegation playoffs three weeks ago, both have parted ways with their manager.

Former goalkeeper Donie O’Mahony finished up in the Mountmellick role after his side were beaten by Mountmellick while Ballyroan man John Irwin’s time in charge of Arles-Kilcruise finished after they lost to Stradbally.

O’Mahony had earlier guided Mountmellick to Division 2 glory and promotion to Division 1B of the league but six-point losses to Ballylinan and Arles-Killeen as well as a seven-point loss to Clonaslee Gaels brought an end to his two-year reign.

He has since been replaced by a management team of Alan George, Brian Dempsey and Shane Conlon. George, father of current Mountmellick player Eoin, guided the Sarsfields ladies team to five Laois SFC titles in a row while Dempsey worked alongside him in that role and was previously involved with Mountmellick when they won the intermediate title, a team on which Shane Conlon was a key member.

Mountmellick’s new setup have had only a handful of sessions and a practice match against Westmeath side The Downs since taking over.

Kilcruise are in a very similar situation after losses to Portlaoise, Killeshin and Stradbally.

It’s believed that a former Laois player from outside the club has taken a couple of trainings since Irwin’s time in charge finished up – but he won’t be with them this evening. Instead they have a couple of former players in charge.

The stakes are high for both clubs so it promises to be a gripping affair in Stradbally.

We will be bringing you updates from that game on our Live Blog while we also have Snapchat coverage from one of tonight’s three championship games. Our schedule has yet to be confirmed.

St Joseph’s meet Graiguecullen in O’Moore Park in the SFC quarter-final while Portlaoise play Rosenallis in the IFC semi-final in Portarlington.

SEE ALSO – WATCH: Some of the highlights from our Snapchat takeover as Kilcavan complete remarkable comeback against O’Dempsey’s