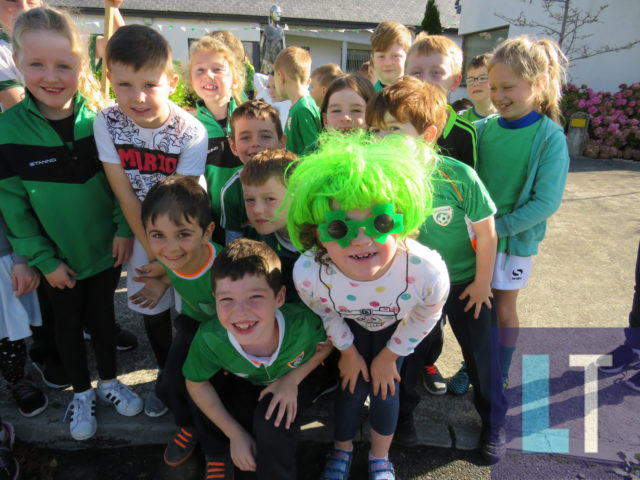 The atmosphere was electric in Ballyfin NS on Friday morning as the school turned green in a massive show of support for the local hurling team who will contest this weekend’s Laois SHC ‘A’ final in O’Moore Park.

Over 200 students, as well as teachers, special needs assistants and local priest Fr Pat Hennessy turned out to greet the LaoisToday team as we visited the school – and most were dressed in green from head to toe ahead of the big occasion. The 12-teacher school, in which Michael Moloney is principal, was looking resplendent in the early September sunshine and the cheers of ‘Ballyfin, Ballyfin, Ballyfin’ rang loudly around the school yard.

As well as flags, bunting and headbands, there were green wigs, green sunglasses and a variety of green jerseys on show.

Teacher Declan Looby – the key man behind the school’s Cumann na mBunscol hurling and football teams for years – helped pull the whole thing together. A number of the Ballyfin Gaels team – who will play Colt at 2pm in O’Moore Park this Sunday – are past students and he proudly showed us some framed photos on the wall of the likes of Eanna Lyons, the Connollys and the Hoffmeisters who will be involved on Sunday.

Incidentally, among the other young faces to feature were Laois and Portlaoise hurler Cian Taylor and Darragh Duggan, who will line out at midfield for Camross in the senior final on Sunday against Clough-Ballacolla.

The connections with Sunday’s big game run deep in the school. 1st Class student Ryan Lanham’s dad George is full-forward on the Ballyfin team and Ryan had a Ballyfin jersey with ‘Lanham’ printed on the back. Shane Connolly in 4th class is a younger brother of star players David and Darragh Connolly while Padraig Culleton was very proud of his cousin Kevin O’Rourke as was Fiona Haslam of her cousin James Finn.

One staff member slightly broke the strict green dress code – SNA Dolores Prendergast from Westport was in her Mayo jersey ahead of Sunday’s All Ireland final.

That one was disappointing for Mayo but the Ballyfin students will be hoping for a different outcome on Sunday – and will no doubt turn out in similar style if the cup comes to visit the school!

Sunday’s Laois SHC ‘A’ final between Ballyfin Gaels and Colt Gaels is at 2pm in O’Moore Park. It will be followed by the SHC final between Camross and Clough-Ballacolla at 4pm.