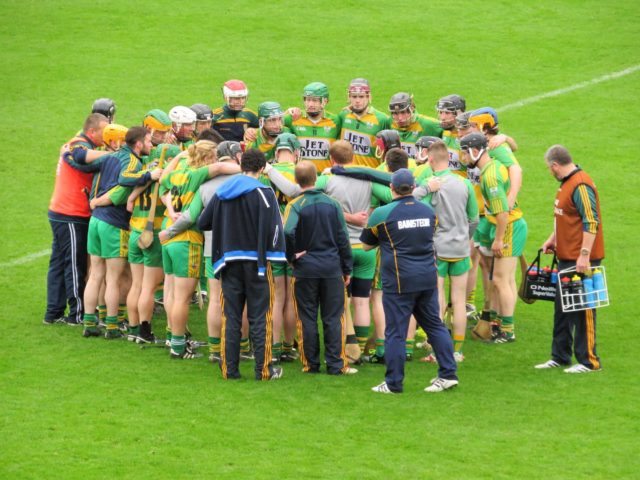 Storm Brian may have other plans, but the last Laois GAA adult final of the year takes place on Sunday in the Training Centre in Portlaoise.

We still have the U-21 hurling and football championships to be completed as well as U-13 and U-15 competitions. And Portlaoise, Emo, The Harps and Trumera are all in Leinster action.

But for the most part the year is winding down. The Laois Shopping Centre ACHL Division 3 final won’t be of much interest outside the two clubs involved but for Ballypickas and Mountmellick it’s a game that has been a long time coming – and at one stage it wasn’t going to go ahead at all.

Way back in June, Ballypickas qualified for the Division 3 final (the fourth tier essentially after Division 1, 1A and 2) after they topped the table with six wins from seven games. The one game they lost was to Mountmellick, 1-18 to 2-10, but Mountmellick dropped points elsewhere and so had to beat Ballinakill in a semi-final to reach the decider.

The final was due to go ahead on Friday, June 30, but Mountmellick sought a postponement as one of their players, Donncha Hartnett, was due to be involved with the Laois senior hurlers against Dublin the following day.

Mountmellick sought a postponement, Laois GAA were agreeable to it, Ballypickas argued it shouldn’t be postponed at short notice and Croke Park agreed with them. The game was ordered then to go ahead on the Friday night in Shanahoe. Mountmellick said they wouldn’t be fulfilling it and the clubs and referees were informed it was off.

But despite that Ballypickas travelled to the venue, togged out in their jerseys, posed for a photo and then posted a lengthy statement on Facebook.

The drama was really only beginning. The Laois CCC awarded the game to Ballypickas and Mountmellick appealed it to Leinster Council. In the meantime, Ballypickas secretary Mary Whelan was involved in a heated debate at a Laois County Board meeting with vice-chairman Sean Mortimer hitting out the club’s actions.

The case was settled, though, with Ballypickas deemed champions and winners of promotion to Division 2 for 2018. But then they offered a rematch.

And now it’s down to go ahead at last, 103 days after it was initially pencilled in for and 134 days after Ballypickas’s last game in the competition.

The championship schedule ensured there was no chance for it to be played prior to now but both clubs went on to have good campaigns, in different grades. Mountmellick won the Junior ‘B’ title at ease following relegation last year while Ballypickas won the Junior ‘A’ crown, beating Rathdowney-Errill in a thrilling final.

This game will wrap up the year, a sort of Super Cup/Charity Shield-type game, pitting Laois’s Junior ‘A’ hurling champions against the Junior ‘B’ winners.

And while another cup would go down well for both clubs, a bigger issue will be resolved too. The LaoisToday club hurling rankings have seen a battle rage all year for coveted places in the Top 25 with Mountmellick initially left out before breaking in following their good championship form. It changed a couple of times since.

After the latest round of championship games, though, Ballypickas had climbed to 24 and Mountmellick dropped to 25 again.

This will settle it for once and for all.

It doesn’t get any bigger than that.