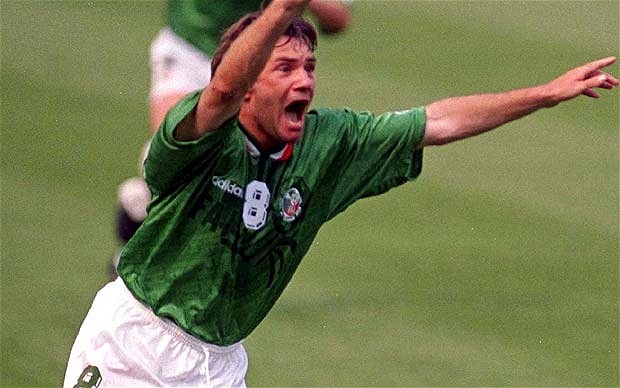 The man who put the ball in the English and Italian nets, Irish legend Ray Houghton will pay a visit to Portlaoise shortly.

There will be a draw on the night in aid of the Cuisle Centre in Portlaoise.

Tickets are available from Humes Pub, committee members or by contacting the Laois RISSC through Facebook.

A night full of entertainment is promised for all in attendance, with a signed Ireland jersey from the recent Moldova game up for grabs, and a host of other prizes on the night.

No doubt, Houghton will regale all with tales of his glittering career.

He played in one of the most talented and successful Liverpool sides alongside John Barnes, Peter Beardsley, Ronnie Whelan and John Aldridge.

He was also managed by some of the managerial legends of the game including former Irish manager Jack Charlton, Kenny Dalglish and Ron Atkinson.

The Laois RISSC met for the first time on June 16.

So far, the majority of the members are from Portlaoise, Stradbally and the surrounding areas.