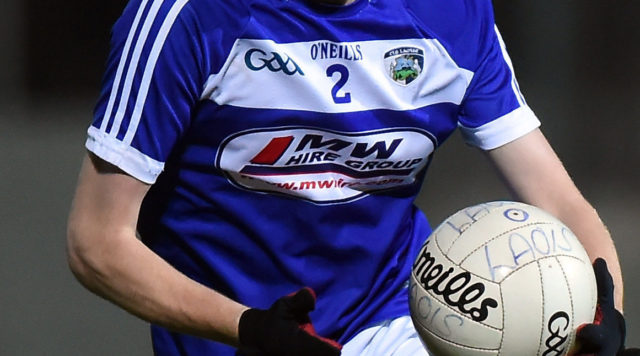 A last gasp James Kelly free was what St Joseph’s required to get past the gallant challenge of Portlaoise in the quarter finals of the U-21 football championship tonight.

The Town played almost all of the second half with 14 men after senior star Benny Carroll picked up a second yellow card after the restart.

Portlaoise were ahead at that stage and they remained that way right up until injury time when St Joseph’s drew level before Kelly’s long range strike won it.

The victors began the scoring in the first minute when Dean Brophy came up from wing back and curled his shot over.

But St Joseph’s were guilty of kicking a number of wides in the first ten minutes and Portlaoise punished them by taking a two point lead.

Jack Brown levelled things up with a free before he scored again with John Kavanagh adding another.

Brian Daly squared things up with a brace of close range frees but Joseph’s grabbed the game’s first goal at the midpoint of the half.

Lir McDonald made a great run down the wing and fed Ciarán Ramsbottom who popped the ball into Dylan Doyle and he flicked the ball beyond the advancing Ethan Larkin.

Doyle then added a point and St Joseph’s almost had a second goal when Ciarán Ramsbottom was put through on goal but Larkin pulled off a fantastic save.

Portlaoise needed to settle down and points from Benny Carroll and Cathal Duggan helped them to do that.

They then re-took the lead when a long ball caused confusion in the St Joseph’s defence and Lee Davis pounced to score the game’s second goal.

Benny Carroll and Brian Daly ended the half by trading frees to leave it 1-6 to 1-5 to Portlaoise at the break.

But the Town were dealt a massive blow a minute into the second half when Benny Carroll picked up a second yellow card after a late tackle on James Fitzgerald.

St Joseph’s first score of the second half came via James Kelly and although that was cancelled out by John Kavanagh, a brace of Brian Daly points narrowed the deficit to one with eight minutes to play.

However, Portlaoise moved two clear once more when substitute Jack Reddin was fouled and John Kavanagh converted the resulting free.

But St Joseph’s refused to be beaten. Two Brian Daly points looked to have snatched a draw but there was still time for them to win it.

St Joseph’s were awarded a free 45 metres from goal and after taking the ball from Daly, James Kelly showed remarkable composure to slot the free over the bar.

Portlaoise were given an opportunity to force a replay but Jack Brown’s shot just dropped short and there was time for no more.

St Joseph’s will now go on to play Graiguecullen in the semi final.

The other semi-final was played last night with Stradbally Parish Gaels and Portarlington playing out a thrilling draw.

That is set to be replayed next Saturday afternoon in Ratheniska.