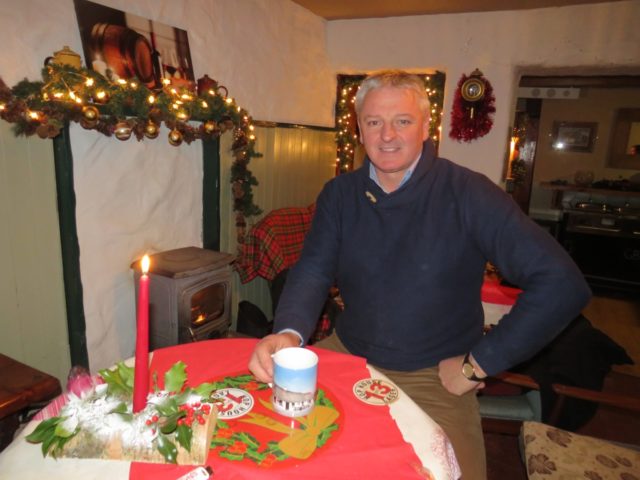 I had heard a lot about Sheeran’s pub in Coolrain and how it’s an experience not to miss out on.

This week I found myself in Coolrain to chat with the man of Sheeran’s pub and his plans in the lead up to Christmas.

Lar Hogan, owner of the pub, took the time to talk all about the history, and future plans that’s in store for Sheeran’s pub.

How did taking over Sheeran’s pub come about for you?

The pub went up for sale in 2014, I had recently retired as a prison officer and I was trying to figure out what to next with myself. I was a regular customer to Sheeran’s and a local to the area.

I thought to myself, if anyone was going to buy it, why not me … I was a local, I knew most of the customers and I had big ideas for the place to change it up and revamp it.

It was a big struggle to finalise it all, but in January of 2015 we opened and we’ve been kept going since.

What changes have you made to the place?

When I started taking this on, I told myself I would give it three years and see what would come of it. I knew it would take a lot of effort, and it would be a struggle to take something so big on.

When I took over this place, it was in need of a lot of attention, we had to install new bathrooms, and even still we need to do a lot of work.

There was also no food served until it was taken over three years ago … and that has been a big addition.

Bringing in live music and serving food is something that I introduced when I took over and seems to be a major advantage.

What is in biggest demand in your business?

After wedding parties, and funerals are always very popular.

What is your usual routine in the lead up to Christmas?

We usually open at about 6pm in the evenings on weekdays, and around 2pm on weekends.

We always try to come up with ideas that will get crowds in. We host a lyric boards night, quiz nights. There always good fun and it creates atmosphere to the place.

We have the vintage rally coming up on the 28th December. And last weekend we had Santa here for the kids in the area. All presents were put together by local people and sponsorships from local businesses.

What makes your business different to others?

We are small rural pub, competing against the other pubs in big towns can be a challenge. But we pride ourselves on what we are really about. We are one of only three thatched pubs in the county (Treacy’s in The Heath and the Fisherman’s in Fisherstown being the others). It’s full of character and we try leave it as authentic as possible.

Knowing the customers and what they like is always an important element in any business. Customers appreciate things like that.

Sheerans of Coolrain is 218 years old, and has always been the number one favourite to go to from not only locals, but people from all over the world.

We had a group from Abu Dhabi recently, and a wedding party from Canada are booked for the new year. It’s bit a surreal the reputation this place has gotten from people around the world.

There is two full time staff members and five part-time workers who are all local. It’s very important to us that all of our staff is local and we will always hope to keep it that way. There is a big community element here in the village, and everyone tries to push that as much as possible.

Are you able to enjoy Christmas with being so busy in the run up to it?

No, I absolutely hate it. There’s just so much to do in here and to make sure everything is sorted. For example, the last day to order drink from our supplier is the 19th of December. And they don’t re-open again until the new year.

So we have to make sure we have enough of everything for three weeks. And to have an idea of what will be in biggest demand.

Some of the busiest nights of the year for us are over the next 10 days. We will back open on Stephen’s day, and this year Camross will have a match playing the 2007 team against the 2017 team. That will bring a good crew of them back here afterwards.

I am often afraid things might go wrong and have to be on top of things..

The 28th December is a very busy day, as the Vintage Run is on. I won’t sleep the night before, for some reason every year because it’s always hectic and we have to be organised.

Is it always a good atmosphere or is it sometimes over bearing?

No it’s always a good atmosphere. The customers that come in is what really makes it, and because we often have live music that always creates another level of atmosphere.

What changes have you had to make to promote this pub?

Being a small rural pub you have to make sure to move with the times. Promoting Sheerans on social media such as Facebook is something we have to keep on top, and in all honesty we need to start getting better at it too.

Thankfully we have huge local support from the community, with help organising events and bringing people into the place.

What’s the funniest thing that has ever happened?

I’ll never forget back a few years ago there was a few of us in the pub, and I could see on the system that Caroline, one of the girls working for us, was coming through the side door. So we all decided it would be funny if we all hid down behind the bar and scare her when she came in.

She would be the type that would scare easily. She came in behind the bar, and we all jumped up and she nearly knocked the whole place down, there was glasses broke and everything. She wasn’t able to speak for about an hour after it!

Do you have any plans for the future with Sheerans?

We have a plan to expand on serving food, making it a sit down restaurant as well. The space is here and there seems to be a demand for it.

We want to try and make this place a place people would come to for Sunday lunch. So fingers crossed withing the next year or so we will be getting the ball rolling on that.

SEE ALSO – Christmas is Coming: A very special season for Imelda Tynan for many reasons