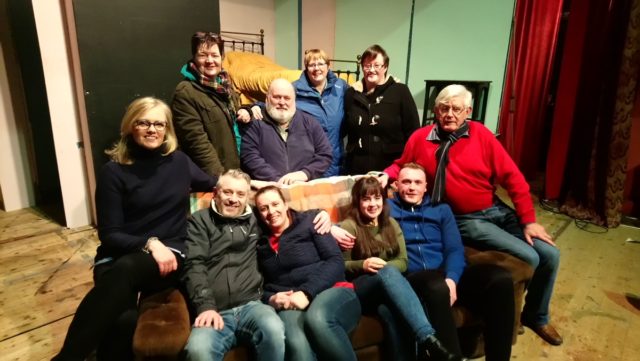 Mountmellick Drama Group have a great production for all you drama ‘lovers’ out there.

Brian Friel’s play, “Lovers- Winners and Losers” will be performed over both stages in the Community Arts Centre Mountmellick on February 8, 9 and 10.

The production comprises of two short plays, called ‘Winners’ and ‘Losers’, with the action taking place over two settings. ‘Winners’ will be upstairs in the Balcony Theatre and the ‘Losers’ will be performed in the main auditorium.

In Winners, the lovers are a young couple, who are preparing for their final school exams and their imminent wedding. Set on a hilltop, Mag and Joe, played by Aislinn McEvoy and Wesley Bergin, go about revising for their exams.

Throughout the play they become distracted and talk on different subjects, much to Joe’s annoyance, and it’s through these conversations we learn much about both characters. Heather Joyce and Shay Flannery play the Narrators in this beautifully written piece directed by Padraig O’Toole.

In the second play (Losers), the lovers are an older but no less passionate couple. Hannah and Andy, played by Lillian O’Neill and Doug Mortimer, struggle to have and maintain a relationship under the watchful eye of Hannah’s mother Mrs Wilson, played by Bernie O’Toole, neighbour Cissy Cassidy played by Patricia Conroy and St Philomena.

Set in Mrs Wilson’s home, it is both funny and poignant and promises to be a crowd pleaser.

Director of ‘Losers’ Jessie Conroy spoke to LaoisToday about the production. “It’s definitely something different. We have this unique facility in the balcony so we tried to think of a production where we could use it,” said Jessie.

The €1,500 proceeds for the production have already been pre-donated to Mountmellick Community Flood Relief Group.

The festival will see groups from all over Ireland come to Mountmellick to perform in the hopes of reaching the All-Ireland.

Patrons should note that the Balcony Theatre is accessible by stairs and by the newly installed lift. However seating is limited so early booking is advised.
To book, call  087 7942994 or 087-4121205.

The remarkable life of a Laois priest who served in the USA for almost...