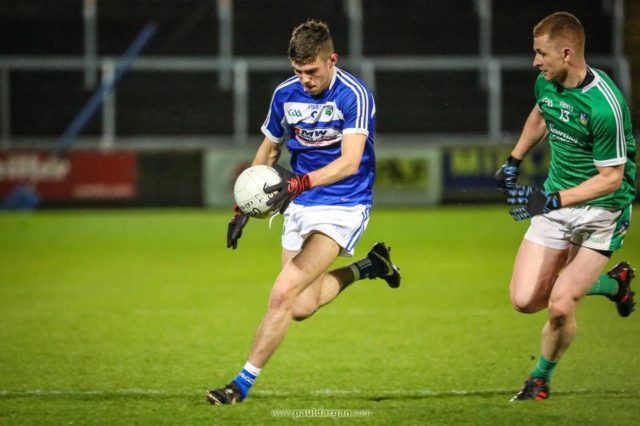 There was a very busy schedule of sport in the weekend gone by.

This was greatly helped as it was the first weekend of the year where the weather didn’t cause too much havoc with fixtures.

The Laois footballers and hurlers were both in league action as well as the ladies footballers.

While there were defeats for the latter two, they produced displays that at least give encouragement that they could have a decent year.

Meanwhile, the footballers got the job done at home to Limerick.

Portlaoise RFC were in action in the Towns Cup, while there was a big upset in soccer between Clonaslee United and Stradbally Town AFC.

So for a chance to digest all that and more, here are our talking points:

1 –  Laois footballers got the better of Limerick on Saturday night

It was a good start to the Sugrue regime, with Laois having a nine points to spare over the Shannonsiders.

This was a very much new look Laois side with six debutantes and four lads who have had limited experience.

John Sugrue was very impressed with his young guns, and he is very confident that the new lads will stay growing game by game.

The star of the show was one of the experienced lads, as Gary Walsh notched up 1-6. What was also impressive was the consistency through the game of their intensity.

In recent years Laois could be accused of falling asleep in the final quarter but on Saturday night they showed improved fitness to continue right throughout the game and it showed in the flowing move that led to Paul Kingston’s goal just at the end of normal time.

2 –  The hurlers lose in Limerick but signs look positive

Laois went down by ten points in the end to Limerick, but that isn’t to take away from the Laois performance.

Laois were very much in the game up until the break and losing Cha Dwyer before throw in certainly hampered their performance.

They were up against a side who had claimed the Munster Hurling League in recent weeks and had members of last year’s All-Ireland U-21 winning side so this was always going to be a tough ask of Eamonn Kelly’s side.

Ross King was the top scorer with his ever reliant free taking, while Paddy Purcell and Willie Dunphy also performed well.

The challenge of staying up in Division 1B will not get any easier for Laois this weekend when they take on All-Ireland champions Galway at home, but the experience of playing against the top sides in the country can only bode well when they compete in the second tier championship this summer.

3 –  Ladies footballers get off to a poor start against Cavan

The Laois ladies football went down to Cavan in the opening round of their league campaign.

Laois showed some fight before the break and went in trailing by four points, but the game got away from Laois in the second half and they conceded a further 1-7 to lose out 2-12 to 0-8.

From a positive point of view, young players like Erone Fitzpatrick, Emma Lawlor and Mary Cotter had good games, with Clare Conlan also putting in a good performance and notching up five points.

Up next for Laois is a trip to Tipperary, who won the intermediate championship last year.

It seems that Portlaoise’s season is back on track, unbeaten so far in 2018 with two very impressive wins in the league and more recently the Towns Cup.

Sunday’s 46-8 defeat of Navan in Togher was a very impressive display, and up next is a home fixture with Skerries.

Skerries knocked Portlaoise out of the cup last year in the first round, and they went on to lose the final to Tullow.

But Portlaoise showed on Sunday that there is something different about this year’s side with a faster and more physical game style being imposed.

Their league form has them struggling against relegation but if a good cup run emerges then they will have the confidence to keep themselves up.

There was big drama in Clonaslee on Sunday when a John Farrell Combined Counties Round 3 cup match went to penalties.

Much fancied Clonaslee failed to break down Stradbally Town over 120 minutes.

Both sides had chances to win the match, including Justin Lalor striking the post for Stradbally in the dying minutes of normal time while Niall Hogan had his effort in cleared off the line in extra-time.

Stradbally didn’t miss a penalty in the shoot-out, and it was Wayne Comerford’s save from Clonaslee’s third penalty that was the difference in the end.

This giant-killing win comes after last week’s Paddy Cotter cup win over Highfield, which also went to a penalty shoot out.

The former Arles-Killeen man, who currently plays for St Loman’s in Westmeath is set to be announced as the new Laois U-20 manager.

The selection committee of Fergal Byron, Laurence Phelan and Kieran Leavy have nominated O’Loughlin as the man to take on Laois for this year’s new age grade competition.

O’Loughlin is currently the DIT Sigerson Cup manager and has won All-Ireland fresher championships with the Dublin college in 2008 and 2009.

He was also a coach when DIT won their first ever Sigerson Cup title in 2013.

O’Loughlin has coach some of the best footballers in the country having worked with the likes of Aidan O’Shea, Paul Flynn and Conor Loftus.

His successful track record of working with young players has made him the the number one candidate for the selection committee.