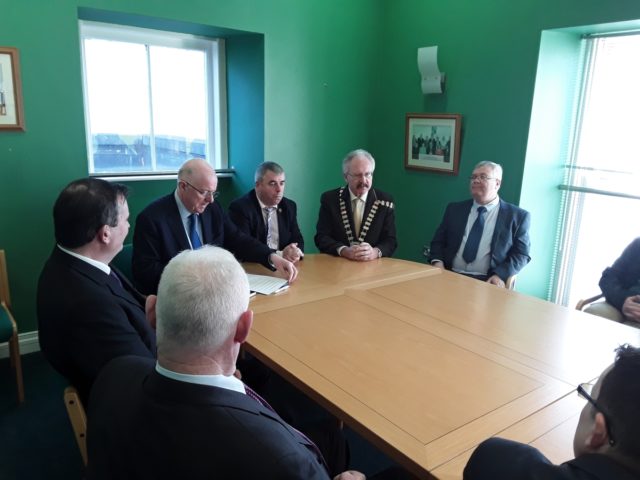 Funding of €3.1 million has been allocated for flood defences in Mountmellick, it was announced this morning.

The flood defences are being prioritised by Laois County Council, with the announcement made at Mountmellick Civic Offices by Minister Kevin Moran and Minister Charlie Flanagan earlier today.

Minister Kevin Moran said: “I am very pleased to return to Mountmellick this morning. I was here last November when the town was badly affected by flooding. Both myself and Minister Flanagan are very keen to ensure that the people of Mountmellick can expect nothing less than the full support of both Government and the local authority in addressing the defence of the town as an urgent priority.”

Minister Moran added:  “The initial task will be the preparation of a brief for the appointment of engineering consultants to carry out the detailed design of the scheme. The detailed design will include a review of the CFRAM mapping taking into account the recorded flood depths of the 22 Nov. 2017 event and the identification of any additional flood defences necessary for the town.

“The Council will progress the outline CFRAM scheme for the town and manage it through detailed, project-level design, planning and construction with OPW support and funding. Consultants are to be appointed to carry out full project level detailed design following which public consultations and planning approval will take place and the appointment of a contractor,” Minister Moran said.

Minister Flanagan said: “In the immediate aftermath of the severe flooding incidents in Mountmellick, Clonaslee and Rosenallis last November, I met with Minister of State Mr Kevin Moran to devise a plan to deal with the issues in these towns and to put in place a long term solution to ensure that flooding of this magnitude does not occur again in these areas. The next day Kevin accompanied me on a visit to Mountmellick to see the damage caused first hand. Being from the Athlone area, he is acutely aware of the destruction caused by flooding and following this visit, he was determined that we would come up with a solution to elevate flooding for the area.”

“The flash flood that happened last November was a traumatic natural disaster which deeply affected those whose homes and businesses were damaged.  It also came as a tremendous shock – I remember as a child, a big flood in Mountmellick in 1968 and again in 1990 but November’s flood was worse and came suddenly without notice,” he said.

“The trail of destruction that the receding waters left in their wake are the visible scars of the flood.  Less immediately visible is the heartache endured by those still trying to put their homes and businesses back together.  However, the people have shown tremendous resilience.  In Mountmellick this morning, I was delighted to see that businesses such as the Hares Corner & Philips Bakery have reopened their doors to the public after being closed for many weeks,” Minister Flanagan said.

“I wish to sincerely thank the volunteers who worked closely with the army and an Garda Siochanna during this time. The excellent working relationship between Laois Civil Defence and Fire Service was clearly visible during those tough days.

“I want to thank Minister Moran for his fast reaction and his decisive approach to providing funding.  The funding announcement of €3.1 million is the biggest single investment in Mountmellick in decades. It is an investment in the town and in its people.  Once the works are completed, the new structures will undoubtedly provide the people of the town with the peace of mind that their business premises and homes will be protected.”

“I wish to commend Laois Council for their allocation of €50,000 to carry out short term measures and flood gates for properties at risk areas around the town and to commend the Council staff for their tremendous work.”

“The proposed measure for Mountmellick would protect at risk properties by a series of hard defences consisting of flood embankments and walls. These hard defences would be set back from the river channel where possible and would protect to the 1% AEP (1 in 100 year flood event) fluvial flood event with an estimated average height of 1m and a total length of 2.4km.

“I wish to sincerely thank Minister Moran for the interest he has shown in County Laois since his appointment and in particular for the close and ongoing engagement he has had with me since November. He made sure that one of his first official visits following his appointment his appointment as Minister of State at the OPW was to Co. Laois and he has maintained that interest since.  I look forward to continuing to work with him for the betterment of Co. Laois.”

Laois County Council and the OPW will meet again shortly to discuss the specific arrangements for the progression of the scheme. I want to congratulate the local authority on their response during last November’s flooding event and the efforts they have made since.

In the period since the severe flooding in November, the Council has undertaken a programme of river channel clearance in the Blackwater & Owenass catchments and under recent allocations for regional and local roads, funding was also set aside in the area of drainage for the county.