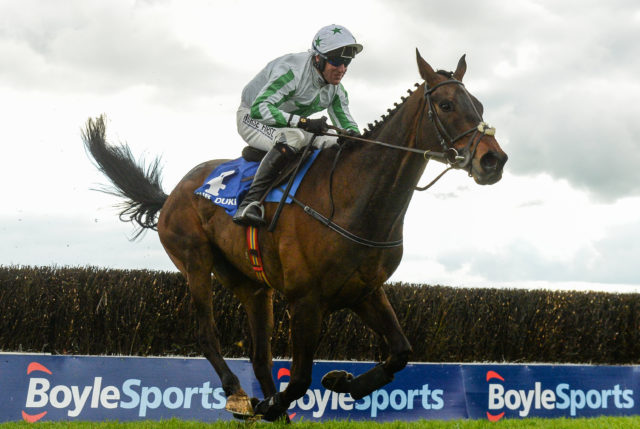 Laois horse Our Duke has seen its odds cut for the Cheltenham Gold Cup following an impressive win in Gowran Park this afternoon.

The Jessica Harrington-trained horse, owned by the Cooper Family Syndicate from Coolrain, is now into 10/1 – from 16/1 – after winning the 2pm Red Mills Chase at the Kilkenny track.

Last year’s Irish Grand National winner had failed to win on either of its two outings since – in Down Royal in November and in Leopardstown two weeks ago.

Jockey Robbie Power said on that occasion that Our Duke was “very ring rusty” after the operation following its Down Royal appearance – but is now back in the winner’s enclosure after seeing off the evens favourite Presenting Percy to win at a price of 5/2.

Our Duke led for most of the 2m4 chase but jumped the fourth last fence badly, no doubt driving the blood pressure of its well-supported connections through the roof.

Total Recall, owned by the Slaneyville Syndicate of which Portlaoise priest Monsignor John Byrne is a member along with his brothers and sisters, is currently priced at 16/1 following recent wins in Newbury and Leopardstown.

What a race – Our Duke holds off Presenting Percy to win the Red Mills Chase! @GowranPark1 pic.twitter.com/VvDb7gYBKL

All things considered, very good from Our Duke. Trip too short, had to concede 7lb, made a mess of one fence and yet still got the job done. Onto the Gold Cup #OurDuke

WOW – Our Duke takes the Red Mills at Gowran!

Absolutely ploughed through a fence down the back – Superb effort to get the win!

Well done if you were on today!

Delighted with Our Duke @GowranPark1. Hope some took the advice @itvracing @SunBets to have a few quid on for the Gold Cup before he ran today. If he jumps better @CheltenhamRaces major player. Yeeehaaa! ??

Our Duke is back! pic.twitter.com/cXJhnOhlZS