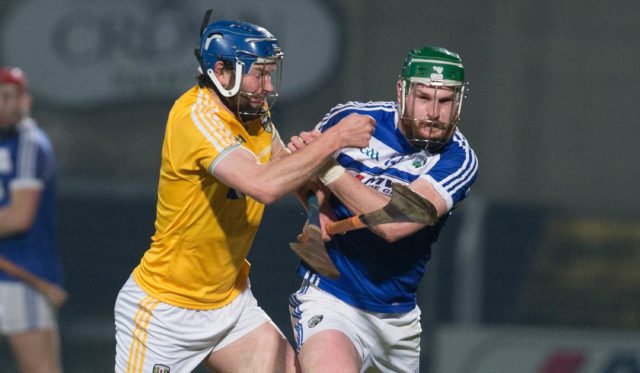 The Laois hurlers got the better of Antrim in O’Moore Park on Saturday night and as ever there was an amount to talk about afterwards.

Here’s just some of the main talking points.

For the second season running, Ross King is captaining the Laois hurlers and he’s really developing into the role. Last year he spent most of his time around midfield but he’s reverted to the full-forward line this year where we’ve become more accustomed to seeing him operate.

On Saturday he was again in top form, finishing with a massive 0-16 to his name. It was the third game in a row that he has finished in double figures, following tallies of 0-12 against Galway and 0-11 against Limerick.

It means that Rathdowney-Errill man is now the top scorer in Division 1 after three games, ahead of second-placed Jason Forde from Tipperary and Antrim’s Neil McManus.

To have a free-taker such as King in such prolific form is great ( he also chipped in with two nice points from play) but Laois’s reliance on dead balls is an issue.

40 of their 62 points to date have come free frees (goalkeeper Enda Rowland has also scored five in three games) while King has accounted for 39 of their 0-62 so far.

To really challenge some of the bigger guns they will need a greater spread of scores – and more from play.

3 – Laois go without a goal again

For the third game running in the league campaign the Laois hurlers failed to score a goal.

While they created a number of chances – as they also did against Galway in the last round – they were guilty of going for goals on a number of occasions in the second half when it wasn’t on.

Laois are the only side in Divisions 1A, 1B or 2A without a goal at this stage and that’s a stat they’ll definitely want to change.

Compared to this time last year, the Laois team is relatively settled with 11 players now having started all three games.

James Ryan continues to go well in midfield and will be delighted to have put his unfortunate sending off against Galway behind him while there is still a few players to come back into contention.

Saturday’s game against Antrim was the first of at least two games between the sides this year.

They are also scheduled to meet in May in the new Tier 2 Joe McDonagh hurling championship – a game Antrim will have home advantage for – while they could meet twice more as well.

If both sides finish in the bottom two in Division 1B of the league they will clash in a relegation playoff on March 11, again likely to be at an Antrim venue, while if they both finish top of the group stage of the Joe McDonagh then they’ll have a final to look forward to on July 1 in Croke Park as a curtain raiser to the Leinster final.

Laois may have won this first battle against Antrim but there’s a hell of a lot of hurling to be played yet in 2018.

A lot has been made of the new hurling championship format that is in place for this year. It sees Laois unable to play in the Leinster championship, instead now in a new Tier 2 All Ireland hurling competition alongside Antrim, Kerry, Carlow, Westmeath and Meath.

It’s a level above the Christy Ring Cup and the teams will all play each other with the top two progressing to the final and to an All Ireland Qualifier game against the third-placed team in Munster or Leinster.

While Laois are disappointed to be excluded from the top table, they’ll be keen to ensure that they are promoted for the 2019 season.

Over the past couple of years they have fared well against those teams they’ll find themselves up against it in this year’s championship – and their record under Eamon Kelly against them is encouraging.

Last year they beat Kerry twice (and lost once) as well as beating Carlow, Meath and Westmeath in the championship. Saturday’s win over Antrim means they are now unbeaten againt all their Tier 2 opponents in their most recent games.

That type of winning run isn’t to be taken for granted but Laois will be hoping it’s something they can keep up throughout 2018.

The nature of the Allianz Hurling League means you’re guaranteed six games – five regular and either a league quarter-final or a relegation playoff.

It’s a strange system where finishing fourth will get you a game against the most in form team in the country but finishing fifth sees you play the one with the worst record.

In any case, Laois would far prefer to be in a quarter-final than a relegation clash – which would more than likely be away to Antrim.

To get to a quarter-final, they are going to have to beat Offaly or Dublin in their next two games.

It’s a great challenge to have. Dublin have been very unimpressive so far, losing heavily to Limerick and Offaly and only beating Antrim by a point.

The Offaly game is next up, though, next Sunday in Tullamore. Laois beat Offaly by six points in last year’s league and while Offaly appear to have improved since then, Laois will give themselves a chance.

Dublin come to O’Moore Park the following weekend and are almost certain to need a win to avoid a relegation playoff too.

It’s possible that the prize for the winners that day will be a quarter-final against the top team in Division 1A.