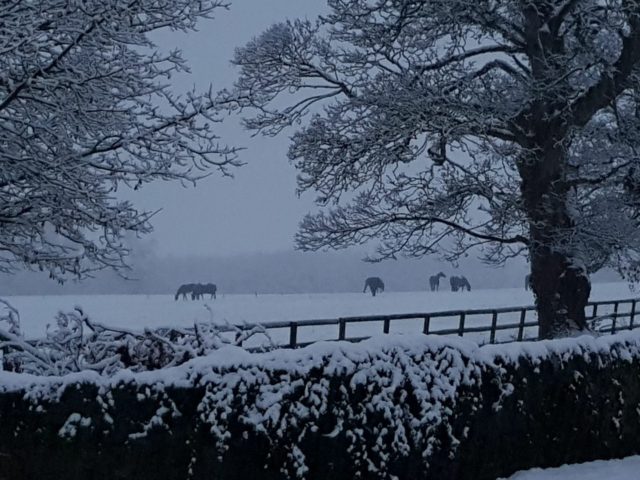 Parts of Laois could be hit with heavy snowfall of between 20 and 30 centimetres of snow next week, according a local meteorologist.

Cathal Nolan of Midland Weather Channel urged people to be prepared for severe weather as winds from Siberea reach the midlands.

“Based on our estimates from previous events, it’s not impossible that some areas in the midlands, particularly eastern areas in and around the Slieve Bloom mountains may see snowfalls in excess  of 20 cms and possibly up to as high has 30cms,” he told John Whelan on Midlands Today on Midlands 103 radio this morning.

On Thursday and Friday of next week, “there is potential for some very heavy snowfalls during this period,” he said.

“Really, looking ahead throughout the course of next week we are expecting conditions transitioning to a spell of weather we haven’t seen, in terms of severity, since the winter of 2010.

“We are expecting to see an area of high pressure become established… We are also likely to see some easterly winds develop. At this time of the year, particularly during winter months, when we see easterly winds developing, we tend to see very cold conditions, and that’s going to be the case through next week.

“We are expecting to see spells of heavy snow in areas of the midlands and temperatures well below freezing overnight. Indeed, daytime temperatures themselves are expected to remain sub zero,” Mr Nolan said.

“In terms of the severity of the conditions, they are likely to match, and in terms of snow could even exceed the conditions we saw in 2010. However, looking at the longevity… I don’t think it will be quite as long as 2010,” he said.

While there temperatures are slightly higher at the end of February/start of March, Mr Nolan is advising caution.

“I would stress to the local authorities that this is the time to take pro-active advice rather than reactionary measures. In terms of gritting the road, in terms of distribution of information in relation to the upcoming events, this is something that needs to be done over the next coming days, to ensure they are adequately prepared for what is expected to be severe weather,” he warned.

He urged people to ensure they are stocked up on the essentials, and have a quick chat with elderly neighbours and keep an eye out for them.

“The worst of the conditions aren’t expected to set in until Tuesday afternoon/Tuesday night and continuing then for the remainder of next week,” he said.