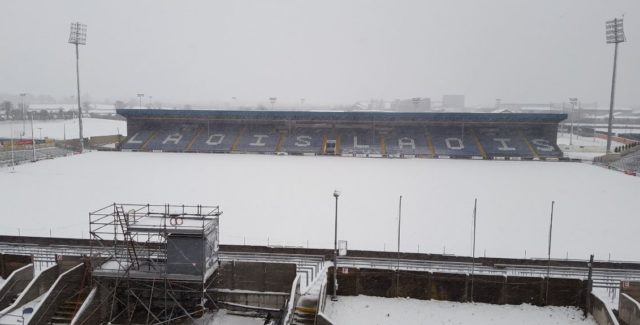 The Laois hurlers and footballers are due to be part of a double header of National League game in O’Moore Park this Sunday – but both those fixtures are now under threat because of the current weather situation.

The Laois footballers are fixed to play Antrim at 12.30pm on O’Moore Park in Round 5 of the Allianz Football League while the hurlers take on Dublin at 2pm.

With the country currently covered in snow and Storm Emma on its way, a spokesperson for the GAA has said that they will make a decision on Friday on the weekend’s games.

Both games are of huge consequence to Laois as a win for the footballers would move them closer to promotion while also damaging Antrim’s hopes. A win for the hurlers would save them from a relegation playoff and send them through to a league quarter-final.

Feargal McGill, the GAA director of games administration and player welfare, told the 42.ie that the GAA will make a decision on Friday as to whether the games go on around the country this weekend. There is a full schedule of both hurling and football on Saturday and Sunday across all divisions.

With the condensed fixture schedule, there is little leeway for rescheduled games to be pencilled in as the hurling league has games fixed for the next four weekends while there is no available weekend for Laois or Antrim to be re-fixed if it has to be postponed.

Laois are going to London next weekend – but that is spare weekend for the other six teams in the Division. They all play the following weekend, March 18, with the final round of games down for decision on March 25 and the Division 4 league final fixed for Saturday, March 31.

McGill revealed that midweek games will not be a runner if there are postponements and that if the hurling league games are rescheduled it will not impact on plans to keep the month of April free for club matches.

“We have a contingency plan in place for every fixture between now and the end of the leagues,” McGill told The42.

“That will allow us to finish the leagues and not impact on the club window in April.

“The plan doesn’t involve any midweek games. The big issue is our players are still amateurs and midweek games would involve people taking time off work.

“So even if there’s a second weather event, we won’t be looking at midweek fixtures. We’ll make the call for this weekend’s matches on Friday.”

Already Laois GAA have postponed a number of events this week, including the 2018 club championship draws, the weekend Palmer and Kelly Cup action and the first of the the €130 ticket draws.