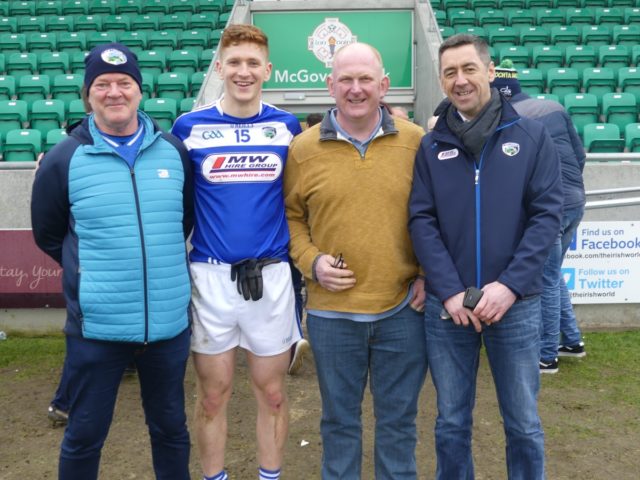 Any Laois supporter that was in Ruislip on Sunday will certainly never forget it.

It may not have been the biggest game the county has ever played but it certainly was one of the most novel.

Laois teams have played all over Ireland and there is barely a county ground in the country that haven’t played in at some stage.

Playing overseas, however, hasn’t happened too often but relegation to Division 4 meant that they would come up against London for the first time in a competitive game.

Since Laois made the drop last spring the fixture against London was the one that caught the attention of Laois supporters.

And when it was confirmed that Laois would play in Ruislip, supporters from around the county began making plans.

Over 1000 Laois supporters made the trip with most making a weekend of it in the English capital.

A number of supporters gathered in the Crown Bar in the Clayton hotel where the team were staying on Saturday night and all made it out for the 1pm throw in on Sunday, some slightly worse for wear.

Fans were in high spirits as they arrived to the grounds and happily posed for LaoisToday who were on hand to capture and record the occasion.

And while the occasion allowed Laois people make a bit of a party out of it, a number of Laois people living in London or in the UK used it as an opportunity to link up with old friends or relatives. It was that type of day.

The game itself saw a few nervous moments for Laois but they did just enough to record a 0-17 to 2-9 win to keep their promotion hopes alive.

Bigger tests await against fellow contenders Carlow and Antrim in the coming weeks but for the Laois crowd in attendance they were just happy to get away with the win.

After the game players and supporters mingled happily on the pitch and manager John Sugrue ordered that a group photo be taken with whowever was hanging around at that time.

Many more made their way to the fine clubhouse facilities where the pints were flowing, the traditional music was blaring and Laois people put club rivalries aside to unite under the blue and white banner.

While everyone enjoyed the weekend the common consensus was the hope that Laois will get promoted and won’t have to make the trip again!

Our photographer was on hand to capture a selection of images from a weekend that will live long in the memory.