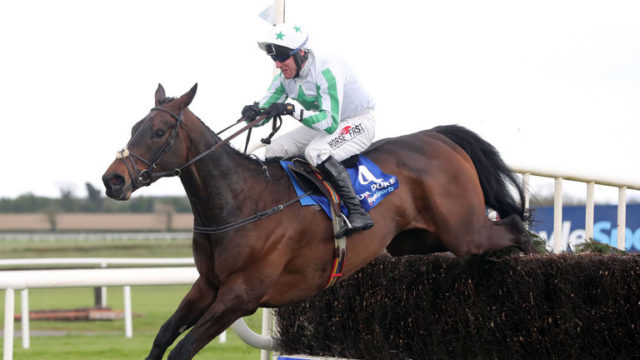 Laois horse, Our Duke, has been backed in as the bookies’ favourite for tomorrow’s prestigious Timico Gold Cup in Cheltenham.

Having initially traded at 16/1, the horse, which is owned by the Cooper family in Coolrain and won last year’s Irish Grand National, has shortened to 4/1 favourite with bookmakers such as Paddy Power and Betway.

The sudden surge for Our Duke has been linked to a number of different factors.

Heavy ground has taken over at Cheltenham this week and that has favoured Our Duke in the past. The other heavily fancied horse in the race, Might Bite, is less suited to such conditions, while last year’s winner, Sizing John, has been withdrawn because of injury.

Sizing John’s withdrawal has meant Robbie Power will now be on Our Duke in the feature race of the week. Power has been on board in all of Our Duke’s big successes and his presence is a massive plus.

Another factor was the performance of Presenting Percy yesterday in the RSA chase winning it in great style. Our Duke defeated Presenting Percy in a 2m 4f chase in Gowran a couple of weeks ago, and that has led to many believing Our Duke’s recent run could mean that a win is now a big chance.

Jessica Harrington and the Coopers of Coolrain will be hoping that all these factors will lead to an historic win for Our Duke.

SEE ALSO – Cheltenham 2018: Your race-by-race guide to Day 3 of the festival