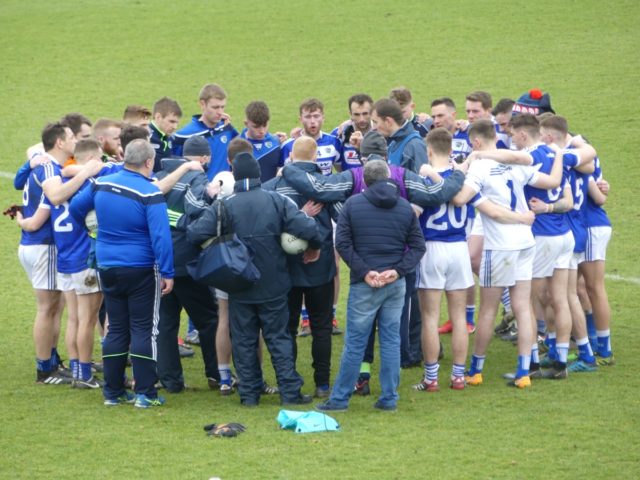 14-man Laois have qualified for the Division 4 final.

They only scored one point in the second half but did enough to hold on to win in a dramatic match.

John O’Loughlin won the throw in and Carlow retreated en mass into their own half.

Laois held the ball for three minutes before eventually Benny Carroll, Brian Glynn and Alan Farrell combined to set up Gary Walsh who rifles a shot into the bottom corner.

Carlow failed to score from play in the first half and relied entirely on Paul Broderick frees.

The first of them arrived after five minutes but that was quickly cancelled out by Gary Walsh who did the same.

Donie Kingston then extended Laois’ lead to four when he pointed on the run after a rare touch of the ball from the big man who was kept out of the game for the half.

Broderick and Alan Farrell then swapped points before Gary Walsh took his tally to 1-2 after pointing from a free which O’Loughlin won.

But Carlow enjoyed a good spell in the final ten minutes of the half as Broderick reeled off three unanswered frees.

The second half adopted a similar pattern to the first with Carlow funneling men behind the ball and happy to let Laois have possession.

Nineteen minutes of the second half time went with neither team able to score and just one wide each kicked before Carlow almost had a goal.

Substitute Jordan Morrissey got in one on one with Graham Brody but the Portlaoise keeper made a brilliant save.

Laois lost Kieran Lillis to a second yellow card and Carlow got their first score from play via Broderick after 58 minutes.

Paul Broderick cut the gap to the minimum with three minutes to go but Donie Kingston replied with Laois’ first score of the half a minute later.

Broderick cut the deficit to one again as we entered injury time of which five minutes were signaled.

Carlow almost won it with the last kick of th game but John Murphy’s shot was blocked and the referee signalled for a throw ball.

Donie Kingston won it and the final whistled sounded.