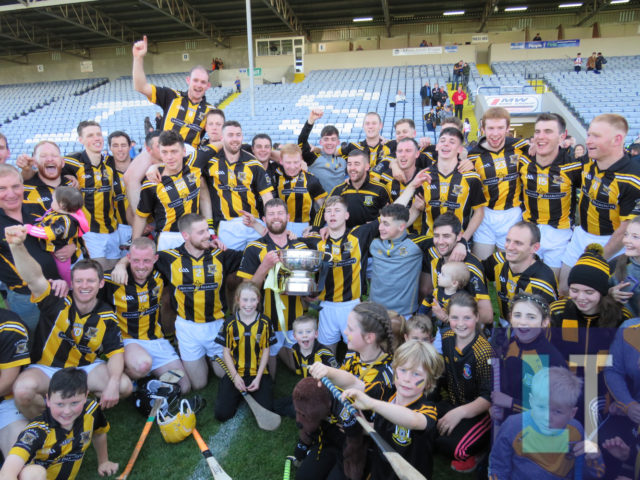 The Laois GAA hurling season gets underway today with a full schedule of games in Division 1 of the league.

While the weather is cold and the ground is soft and it couldn’t be any further from championship hurling, we’ve decided to once again rank Laois’s Top 25 teams at this current moment.

We’ll return to this topic midway through the leagues and again before the championship. But for now, this is how we rate them.

Had a great year last year when the Junior ‘A’ hurling title – the fourth grade – but find themselves Mountmellick, who won the fifth tier, after the ongoing saga between the clubs was decided when their acrimonious Division 3 league final was won by Mountmellick. They make the top 25 for the start of the season and will be looking to go up the rankings as the year goes on.

There was serious complaining from certain sectors of the Mountmellick hurling team when we didn’t consider them one of the top 25 teams in Laois last year! This despite the fact that their Junior ‘B’ win technically left them as the county’s 33rd best team. But joking aside, they are a team on the rise. They will play in the fourth tier Junior ‘A’ championship and after their double last season, they’ll fancy their chances of winning another promotion.

After their Junior ‘A’ win in 2016, they found the step up to intermediate too much last season. But their main man Ben Conroy was out injured for the season and with him back in the mix they’ll be a much stronger side. They’ve also joined up with Castletown for senior so they could have a busy year in front of them. Have potential to rise up this list.

Laois’s newest hurling club will bring a new dimension to the intermediate grade after Park-Ratheniska and Timahoe decided to pool their resources. Being small dual clubs was an obvious headache for them separately and while that won’t disappear now (they’ll still have plenty of headaches in that regard) they do have a nice scattering of good hurlers. An unknown quantity but they could make an impression.

The second teams of the junior clubs can be very unpredictable but there’s no doubting that the bigger clubs do have the resources to have very good sides. Camross had a great season last year and with a lot of good young players coming through they should have a decent intermediate team this year as well. Disappointed in this grade last year but you have to imagine they can improve.

Beaten in the intermediate final in 2016 and in the Division 2 league final last year, Clough-Ballacolla’s second team have been very consistent for the past couple of seasons. Lost to Rathdowney-Errill in the semi-final of the intermediate last year they won’t be far away again this time.

Beaten early on in the championship by Clough-Ballacolla last year, they then only lost to eventual champions Trumera in the semi-final after a replay. A handful of players are involved with Colt at Senior ‘A’ level and they’ll be looking to make the step up themselves also.

Felt very hard done by in the intermediate final last year and with a team beaten in the Junior ‘A’ final and their U-21s crowned champions in that grade, they have a serious base of players to pick from.

They were outclassed in the Senior ‘A’ last year but they’ll be one of the stronger teams now in the intermediate. Another club with great depth, their presence in this grade will make it very interesting.

A small club that have gone up and down from this grade a couple of times in recent years. Will probably find the step up to Senior ‘A’ difficult once again but they aren’t certainties to go down and they can make life difficult for the teams ranked above them here

Shanahoe and Ballypickas joined forces last year and while they suffered a big defeat to Colt in the opening round, they only narrowly lost to The Harps and then easily got the better of Borris-Kilcotton to stay up. The amalgamation should be stronger this year

Were very disappointing in the intermediate grade last year, going out after being well beaten by Rosenallis in the quarter-finals. Do have some fine hurlers and have the potential to go up these rankings if they find form.

Endured a disappointing season last year in this grade and will have to improve considerably if they’re to challenge the sides ahead of them. Finalists in this grade as recently as 2015, they should be competitive in this grade if they can pull everything together.

Bucked the trend of relegated senior teams winning instant promotion. Flattered to deceive last year and while they have a big squad and a selection of fine players they need to develop a killer instinct. Fintan Deegan, who guided Ballyfin to success in this grade last year, is now in charge of his home club and they have the potential to win it out.

Rosenallis will be interesting to observe this year. 2016 was such a fabulous season for them in both codes and the went well last year before running out of steam. They’re under new management in both hurling football – and both are outsiders, which makes it a completely new dynamic. Will the well be running dry a bit or are they only getting going?

Beaten finalists last year, they’ll be looking to make up for that disappointment in 2018. A tough team for anyone to play against but might lack a bit of firepower to make the step up.

Relegated last year but experienced massive bad luck by losing both Cahir Healy and Tommy Fitzgerald to injury. They should have both back this year and Cian Taylor and Aaron Bergin should really stand out at this grade. Can they bounce back straight away, as they did in 2015, or will they struggle as The Harps did last year?

Were very impressive winners of the Senior ‘A’ last year but lost manager Fintan Deegan at the end of the season and his replacement Mark Tyrell has also opted to walk away, after a short time in charge. They have been handed the softer side of the draw but staying up would mark a good achievement in their first year back in the top grade. The only dual senior club in Laois which merits serious respect in its own right.

Castletown put in a couple of decent performances in the senior last year – against Ballinakill and Abbeyleix – but failed to win either and ended up in the relegation playoff against Portlaoise. Are back involved with Slieve Bloom and have a good crop of young players coming through. Have been drawn to play champions and neighbours Camross in the first round and a win there could set them up for a great season.

Competed well with Camross in the championship last year and were the only side to beat them in the league. Don’t have the biggest panel and some of their better players are getting on. But they have quality dotted around the field and are capable of taking out a big gun at any stage

The only team to beat Camross last year in the championship and yet find themselves ranked only fifth as the latest season begins. Very reliant on Eoin Reilly, who is now working overseas, and while they would fancy their chances against any of the teams above them, to win the championship, or even reach a final, they’d need to beat at least two of them. They haven’t shown yet that they’re capable of doing that.

Lost to both Camross and Clough-Ballacolla last year but suffered badly with injuries. Still well capable of challenging to win the championship and you only have to look at their county representation to see the quality they have. Their U-21 final win last year also shows they’ve new blood coming through.

Will be disappointed at how the defence of their hard-won 2016 title went last year but they should be back even more determined this year to show that that success wasn’t a one-off. A fully fit PJ Scully again and Aaron Dunphy in top form would give them serious ammunition. Won’t be easily stopped.

Was last year’s final loss one that got away? Can they recover from it? Their league final loss to Camross and subsequent big defeat to Borris-Kilcotton showed a side under pressure but they recovered so well and played their part in an epic county final. In a tough group and have a tough opener against Rathdowney-Errill. Could win it out but any slippage could see them fall down the rankings.

The worst thing about being Number 1 is that there’s only one way to go. But there’s no denying Camross deserve top spot. Under new management as former Kilcormac-Killoughey boss Danny Owens has taken charge. Have a tough championship group and an opener against Castletown when Camross could be down five of last year’s team due suspensions and lads travelling. Might find it hard to hit the same heights as last year but they’ll start as favourites and deservedly so.