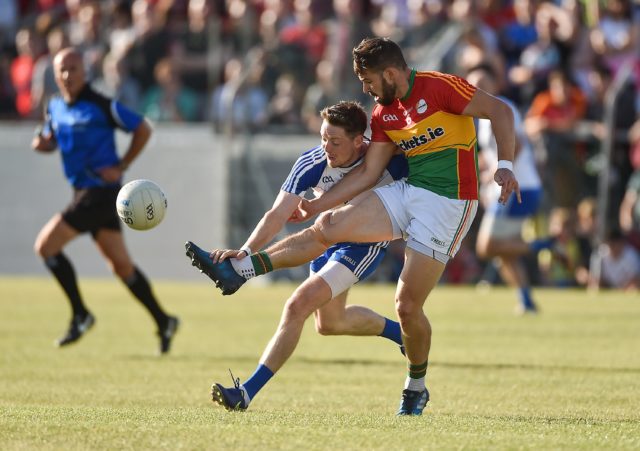 Laois are set to take on Carlow this weekend in the Division 4 football final in Croke Park.

Most readers will know plenty about Laois’s players so we have decided to put together a handy player by player guide to the Carlow team that will likely feature on Saturday.

He has been in and out of the sticks for Carlow in recent years having enjoyed a tussle with fellow keeper Craig Kearney. Should start on Saturday.

Started against Laois the last day out but he will face big competition from Robbie Molloy to get the nod, as Molloy has been favoured so far.

A Kerry native, having transferred from Glenflesk a couple of years ago, and is now a key part to the Carlow defence.

He was a member of the Carlow minor side who lost to Laois in the 2007 Leinster minor final. Recovered from a bad leg break in recent years and is now flying fit again and playing well.

He was named the Carlow senior footballer of the year in 2016.

Just out of the minor grade, his father is Jody Morrissey who played for Carlow and the Grandson of one of Laois’s biggest footballing legends – Tommy Murphy. Recently won an All-Ireland Fresher’s title with DCU.

Has played over 90 games for Carlow and is one of the recognizable names on the Carlow team. He captained the minor team of 2007.

He was named Carlow senior footballer of the year in 2015.

He lined out at midfield for the minors in 2007, marking John O’Loughlin. He will probably face a similar task this weekend. Once on the books of AFL side, Sydney Swans. He is one of Carlow’s danger men.

Having made the switch to focus on the footballers over the hurlers a few years back, he has gone on to do wonders for Carlow. Last year he was the man of the match against the Dubs and his nickname is ‘Choo Choo’.

He was named Carlow senior footballer of the year in 2017 and is now closing in on 100 appearances for Carlow.

He is the country’s second highest scorer so far in the league, three points behind Laois’s Gary Walsh. He is Carlow’s main source for scores and can be deadly from a free. He is also a teacher in Heywood CS.

Son of the manager Turlough O’Brien, he is labelled as a strong, hard-working forward.

The captain for 2018 and has always been a leader and a solid performer for Carlow for a long time. He has also racked up over 90 appearances for Carlow.

He is an experienced attacking half back and he will certainly be pushing for starting place.

The most experienced man in the Carlow squad with over 100 appearances in the red, green and yellow jersey. He will more than likely feature at some point.

A new member to this year’s panel, and he adds plenty of ability.

Another new member to the Carlow panel for 2018, again adding good ability.

Also only added to the panel this year, he is a very capable player.

Came off the bench last week and may well do so again. An accomplished young defender.

He is a small, pacey attacking wing back who scored a very important goal for against Wexford in last year’s championship. He was a late replacement for Jordan Morrissey last Sunday.