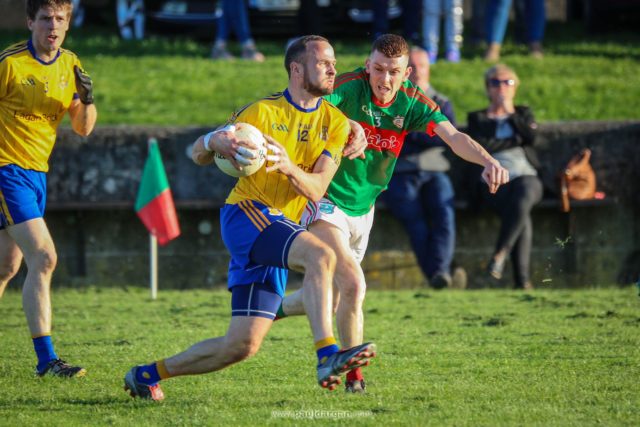 In a repeat of last year’s Division 1A final, it was St Joseph’s who powered from start to finish to end with a 17 point victory of a disappointing O’Dempsey’s side.

Michael Keogh was the standout performer, with his 1-7 setting a great foundation for the victory.

O’Dempsey’s were without three of their key men in Shane Nerney, Rory Bracken and Conor Meredith but even with them three, it would have been still a tough task to stop they pace and strength of this impressive young St Joseph’s side.

It was Keogh who kicked the opening three scores of the game, and they were four up when O’Dempsey’s final grabbed their first through Mark Barry.

It was the story of the game as Joseph’s missed little and O’Dempsey’s simply failed to even get inside to cause any problems.

Michael Keogh grabbed the first goal of the game after 22 minutes, rounding off a patient team move.

At the break St Joseph’s led 1-10 to 0-3 and it was not going to get any better for the Killenard side as Joseph’s only improved in the second half.

A false sense of hope was given when a blip in the St Joseph’s defence allowed Dan McCormack to tower above Dan Dunne in goal to punch home their only goal.

That was about all they would get in the second half as St Joseph’s fitness began to show, and two Michael Keogh points settle them down.

The fresh looking Tom Kelly was able to get on the end of an another well worked team goal, to stretch their lead even further, and his 1-2 was a reward for the hard work and leadership he displayed.

Raiding corner-back Donal Ramsbottom chipped in with two points towards the end of the second half.

In the end a 17 point margin was fully deserved and it probably could have been more as there were a number of wasted chances in the second half.

For Joseph’s it means they go top following Portlaoise’s loss to Graiguecullen and O’Dempsey’s now find themselves in mid-table but still in with a shout of pushing for a spot in the final.