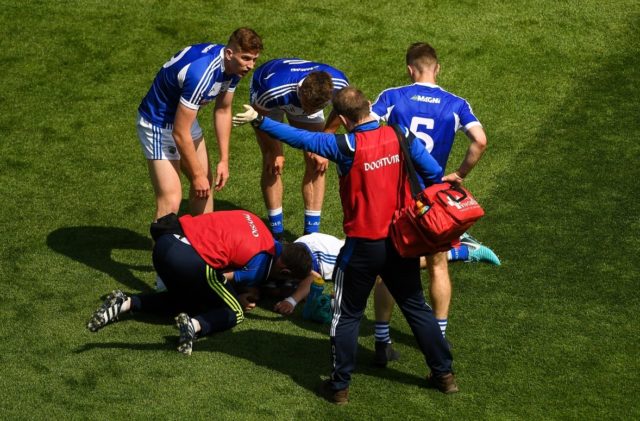 Laois football captain Stephen Attride is facing a long spell on the sidelines and will miss the Leinster final – after he suffered a double fracture to his skull in the dying minutes of Sunday’s win over Carlow in Croke Park.

Attride picked up the injury deep into stoppage time when he  threw himself on a breaking ball to deny a Carlow attack. He won the ball – but his head accidentally collided with the leg of Carlow player Ciaran Moran.

Attride was knocked out and was instantly treated by the Laois medical team before being taken from the field on a stretcher. The game was held up for a number of minutes before Laois eventually held on to win 0-12 to 0-8 to book their place in the Leinster final for the first time since 2007.

Attride was taken to the nearby Mater Hospital where he was kept overnight – and where x-rays confirmed the injury.

Laois Football Board Chairman Laurence Phelan – and a Killeshin club-mate of Attride’s – confirmed the devastating news to LaoisToday.

“He’s after getting the scans and they’ve been sent to Beaumount and St James. He was knocked out for a couple of minutes and he has a deep gash – but he has a double fracture of the skull and he’s unlikely to play football again this year.

“It’s such hard blow. It was an incredible act of bravery – one of the bravest acts I’ve ever seen – and it stopped a Carlow attack when they were driving on looking for a goal to level the game.”

The Laois Senior Footballers, Management and backroom team would like to thank all the Laois supporters today and for those who couldn’t make it see you in The Leinster final , they also want to wish their inspirational Captain Stephen Attride a speedy recovery #laoisabu ?⚪

Attride, a teacher in Knockbeg College, has had awful injury luck since he was appointed Laois captain at the start of the 2017 season – but this is arguably the hardest blow of all and will see him miss Laois’s first Leinster final in 11 years.

He has been a first-choice player over the last number of years and has featured in a variety of roles. He started the opening round of the championship against Wexford at wing-back but reverted to the corner for the Westmeath game.

His absence will be keenly felt by Laois and leaves John Sugrue and his management team with a big decision as to who takes his place. Ruaidhri C Fennell and Denis Booth have both been used in defence in this championship but neither were included in the 26-man matchday squad on Sunday.

Shane Nerney and Darren Strong were the two back subs used while Portlaoise’s David Holland was the only other recognised defender on the bench.

Laois could look at a direct replacement for Attride – or move perhaps Trevor Collins back into the corner with a number of players experienced at wing-back.

Laois will take on Dublin in the Leinster final on Sunday, June 24, in Croke Park. Tickets go on sale this morning from the Laois GAA offices as well as Supervalu stores and tickets.ie.