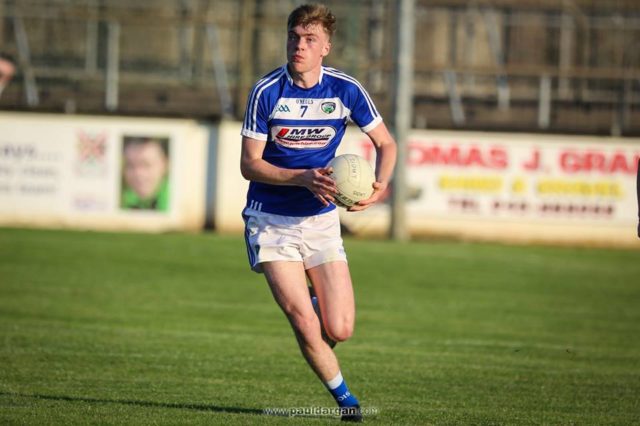 The Laois U-20s are out of the Leinster championship after they lost out to Meath in Navan this afternoon.

Billy O’Loughlin’s charges went into the game knowing only a win would give them a chance to progress from the group but in the end, despite a brave second half comeback, Meath just proved that bit too strong

Laois played against the breeze in the first half and almost had a goal in the first minute. Some lovely handpassing split the Meath defence open and Courtwood wing back Seán O’Flynn got in one on one with the keeper but his shot just whistled wide.

Meath opened the scoring through Darragh Campion but Laois midfielder Peter Kealy replied from play against the wind.

Jason Scully regained the lead for Meath but Laois were level again after six minutes when Evan Lowry swung one over.

Meath fired a number of wides in the early part of the first half but they opened a four point lead by the 20th minute thanks to Frank O’Reilly, James Conlon and a brace from Conor Moriarty.

Evan Lowry, Alan Kinsella and Diarmuid Whelan all raised white flags before half time but Meath headed for the dressing rooms with a five point advantage.

Frank O’Reilly, Jason Scully and Darragh Campion all scored to leave it 0-10 to 0-5 at half time.

Laois made a disastrous start to the second half. They lost a hop ball on their own 21 and the ball came to Ethan Devine who sailed through the defence and rattled the net.

Conor Moriarty added a free and now there were nine points between the teams.

Laois responded well though with a monster score from midfielder Eoin Dunne and two from the right boot of Diarmuid Whelan to leave six in it with twenty minutes to play.

The same player then added two more frees and another from play – five points on the trot for him and six for the O’Moore’s – to bring Laois right back into the game.

Then then had the chance to draw level when Ronan Coffey played in Evan Lowry but his low shot just flew wide of the post.

Ethan Devine steadied Meath as we entered the final quarter of the game with his first point.

But Laois refused to go away and Ronan Coffey cut the margin to three again after 49 minutes.

However, Meath had one more kick in them. James Conlon fisted a point before Ethan Devine slammed home his second goal to put seven between them.

Diarmuid Whelan hit his eight point but neither side scored again as Meath held on to win.