It didn’t always look good for Mountmellick in Acragar this evening as David Conway blasted the net in the first minute of the game. Mountmellick re-grouped with points from Karl Donoher, Colm Coss and Daragh Hanlon.

Niall Mullen opened up his high scoring tally for the night with a free in the eighth minute which Anthony Elroy replied to with his own point a minute later.

Jason Caffrey and Conway exchanged scores before Conway excelled at lodging a point from a tight angle to draw the teams even.

Conn Maher pointed for Mountmellick before Mullins and Conway exchanged frees. Coss added another long-range point and shortly after that Caomhan Brennan rounded two Mountmellick defenders for Arles-Kilcruise’s fifth point of the match.

Mullen added another free to leave the sides Mountmellick 0-11 Arles-Kilcruise 1-5 at half-time.

Arles-Kilcruise came out all guns blazing in the first five minutes of the second half, with sub Kevin O’Neill, who came on for David Conway at the break, converting another point before Brennan landed a goal to put his side into the lead.

Conn Maher and Kevin Meaney exchanged points in the 38th and 39th minute as Brennan produced a brilliant catch while turning and landed over his third score of the night.

As Arles began to pull away with a two point lead, Eoin George stepped up for Mountmellick and ran through the Arles defence, scoring a much-needed goal for Mountmellick.

Maher and Dermot Nolan added one each point at each end and points from wing-back Mark Dowling and Caffrey with 10 minutes to go.

Arles-Kilcruise kicked on, landing three points from Liam Whelan, O’Neill and Nolan to put them in the lead but Mountmellick struck back with a point from Caffrey to draw level.

A free in the 58th minute gave Mountmellick the chance they needed for this crucial win. Ben Forde stepped up and delivered as the ball just pipped inside the post. George added another point for his father’s side and Mountmellick rejoiced as two point victors, on a scoreline of 1-19 to 2-14.

Crettyard also upset the odds with a win over Rosenallis at home tonight. Crettyard took the lead early doors with Cormac Murphy and Fiachra C-Fennell getting the scores going for both sides.

Sean O’Shea, Patrick Reilly, Sean Reilly and Niall Purcell all kicked over points for Crettyard while Donal Lalor landed his first of five free for the night before Brian Fitzpatrick smashed a bouncing ball into the back of the net.

Murphy and Philip Brennan took their own goal scoring opportunities and Seamus Dowling added a point to make it Crettyard 2-8 Rosenallis 1-6.

Donal Lalor landed another free which Ronan Murray and Jack Friel added to. However a Rosenallis resurgence wasn’t meant to be as Dowling, Criostoir Maher and Murphy had their say on the scoreboard, with the final score ending Crettyard 2-14 Rosenallis 1-11.

Killeshin came out raring to go in their match against Ballyroan tonight. They opened the scoring in the first minute with a Michéal Doran point. Eoin Lowry added two points of his own before Barry Ryan put his name on the scoreboard for Killeshin.

Ballyroan got their first score on the board in the ninth minute before Lowry kicked another two over from play.Ballyroan added another point before Liam Delaney scored the first goal of the five goal display.

Pauric Bolton added a point for Killeshin before Arnie Mahon landed a goal for the men in green in the 24th minute, followed by a late Ballyroan point to leave the score at half-time read Killeshin 1-8 Ballyroan 1-5.

Cathal Brennan managed to land a goal for Killeshin to pull them six points into the lead in the 32nd minute while Eoin Lowry landed another free for his side.

Scott Conroy stepped up to convert a penalty for Ballyroan while Luke Attride, Eoin Lowry, Kevin and Cathal Brennan landed more scores for Killeshin while Diarmuid Whelan, Padraig McMahon and Scott Conroy all converted for Ballyroan-Abbey.

A 61st minute goal sealed the deal for Killeshin as the teams finished Killeshin 3-13 Ballyroan 2-11.

Arles-Killeen also pulled off a surprise result as they defeated promotion chasing Emo to virtually save themselves from relegation.

The only way they can now be dragged into the dogfight is if they lose their game and both Crettyard and Mountmellick win their remaining matches.

Meanwhile for Emo, they will have to defeat Ballyroan-Abbey and hope that Crettyard also do the same. They also need Killeshin to lose to Crettyard too. 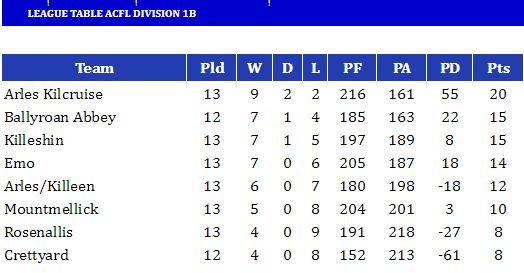