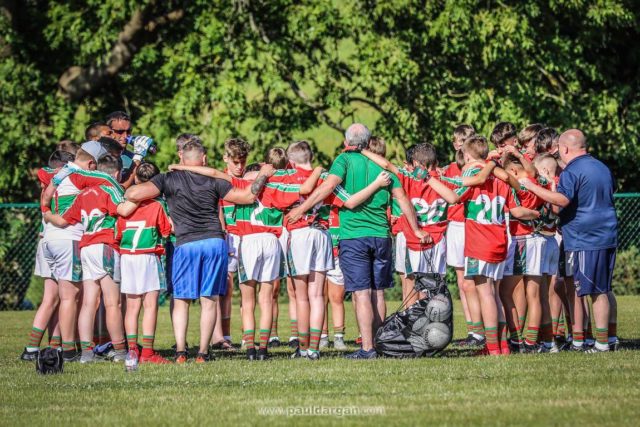 Scorching temperatures greeted the first day of Feile Peil ne nOg in the various venues in Meath, Down and Louth – with all of the Laois clubs performing well in their opening two games.

Portlaoise are in Division 2 of the boys competition and started with a good win over Down side Warrenpoint on a scoreline of 4-5 to 0-5 but they went down to South London in their next game by 1-6 to 1-2.

Portlaoise’s remaining group game is against their hosts Mayobridge  – home club of Down great Benny Coulter – at 10am this morning and a win in that would send them through to the quarter-finals which are fixed for 3pm today.

The semi-finals and final are on Sunday.

In the Girls Division 2 competition, St Conleth’s got the better of Down side CLonduff in their first game by 2-7 to 0-1 but then went down to a strong New York outfit by 1-6 to 0-2 in their next game.

But like Portlaoise, St Conleth’s know if they win final group game this morning against Burren, they too will be into the last eight of Division 2.

Of the four Laois representatives, Graiguecullen are the only club with a 100% record as they had wins over Leitrim side Glencar-Manorhamilton and Down club Liatroim, wins that assure them of top spot and a quarter-final place with a game to spare.

In the boys Division 10 competition, The Heath won their first game against Slane of Meath on a scoreline of 1-6 to 0-6. They lost their next game 2-5 to 1-2 to Offaly side St Manchan’s Gaels. Trailing 1-4 to 0-1 at the break, they fought back very well in the second half before falling short.

A win in their final group game on Saturday morning against Blackhall Gaels of Meath will ensure a quarter-final place.

All of the teams that finish 3rd and 4th in their groups will go into a shield competition.