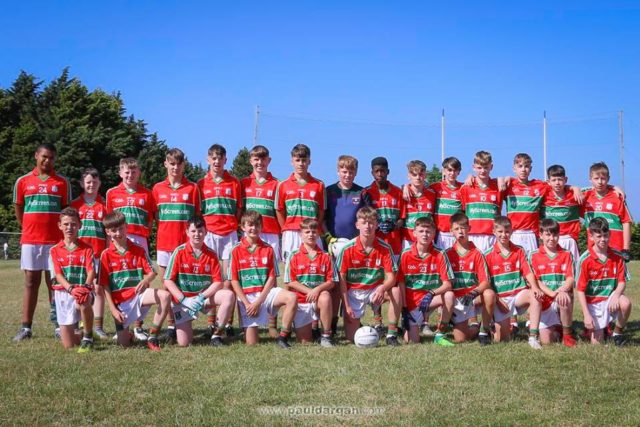 The Feile adventure for Laois teams has come to an end this afternoon.

After The Heath, Portlaoise and St Conleth’s were all eliminated yesterday, it was down to the lads from Graiguecullen to fly the flag for Laois in the Division 5 semi finals this afternoon.

The young Barrowsiders had won every game to this point but came undone under the hot sun against Antrim outfit Ballinderry.

It was tough to take for the young Graiguecullen men who had an All-Ireland final appearance in their sights.

Here is a run down of how each of the four teams got on over the weekend.

Portlaoise were in Division 2 of the boys competition and started with a good win over Down side Warrenpoint on a scoreline of 4-5 to 0-5 but they went down to South London in their next game by 1-6 to 1-2.

Portlaoise’s final group game was against their hosts Mayobridge – home club of Down great Benny Coulter – at 10am on Saturday morning.

They emerged 7-6 to 1-11-6 winners and this set up a last eight meeting with Dublin side St Patrick’s Donabate this afternoon.

However, it was here that the young Townies campaign came to an end.

The Barrowsiders are here after winning the Feile ‘B’ competition in Laois and had a 100% record until today.

Graiguecullen began with wins over Leitrim side Glencar-Manorhamilton and Down club Liatroim – victories that assured them of top spot and a quarter-final place with a game to spare.

They then had a routine win over Sabhall Naomh Pádraig and went on to face Cork outfit Ballinora.

Graigue looked in trouble with six minutes to play as they trailed by five points but they turned things around to win by two.

They went on to face Ballinderry of Antrim in the semi final where their journey ended.

The Heath were invited to take part in the Feile this year after losing the Laois ‘B’ final to Graiguecullen.

The Heath won their first game against Slane of Meath on a scoreline of 1-6 to 0-6. They lost their next game 2-5 to 1-2 to Offaly side St Manchan’s Gaels. Trailing 1-4 to 0-1 at the break, they fought back very well in the second half before falling short.

This meant that they needed to defeat Blackhall Gaels in their last group game to reach the Cup quarter finals – which they duly did.

This set up a clash against Derry side Foreglen O’Briens GFC where The Heath led 1-2 to 0-2 at half time.

However, they couldn’t hold on and the Derry side came back to defeat The Heath.

St Conleth’s got the better of Down side Clonduff in their first game by 2-7 to 0-1 but then went down to a strong New York outfit by 1-6 to 0-2 in their next game.

New York ended Timahoe’s hopes last year but St Conleth’s had another chance to reach the last eight when they face Burren of Down in their final group game.

A fine eight point win left them second in the group and pitted them against neighbours from Kildare – Kilcullen.

However, the Kildare side were a very well organised outfit and they ended St Conleth’s dreams.