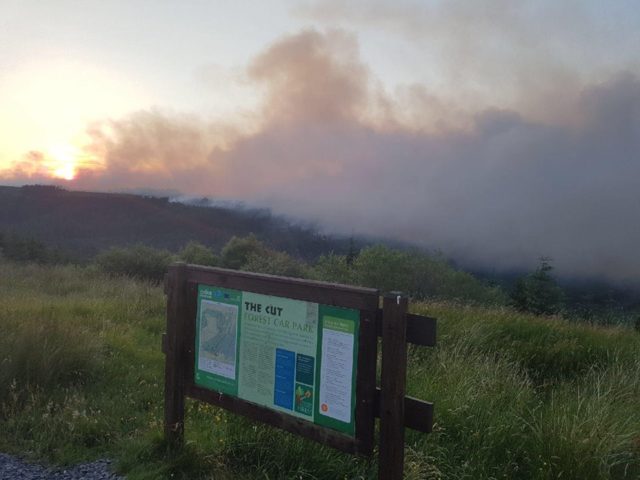 Helicopters are once again in the sky this morning as they battle the latest fire to hit the Slieve Bloom mountains.

Less than 24 hours after it was reported the the fire on the Slieve Bloom mountains had been extinguished, flames and plumes of smokes were visible again last night.

A large plume of smoke could be seen rising above the mountain in the general direction of Clonaslee.

The smoke was visible this time in Offaly from Killeigh to Tullamore and all the way to Kilcormac – and also in Portlaoise.

Fire and Rescue services are urging people not to travel to view the forest fire currently engulfing the Slieve Bloom mountains on the Laois-Offaly border while a road is now closed in the vicinity because of the blaze.

“Offaly and Laois Fire Services are providing water tanker support to Coillte for helicopter firefighting by Coillte and the Aer Corps.

“Please avoid the area of the Cut as road closures are in place to facilitate firefighting operations.

“Be safe today everyone” said Offaly Fire and Rescue in a statement this morning.

The fire was first reported on Wednesday afternoon between Kinnity and Cadamstown with Offaly Fire Services responding to the incident.

Firefighters left the scene late on Thursday night satisfied that the fire had been put out.

The damage to the area is said to be severe with groups such as Birdwatch Ireland alarmed at the harm caused to local wildlife.