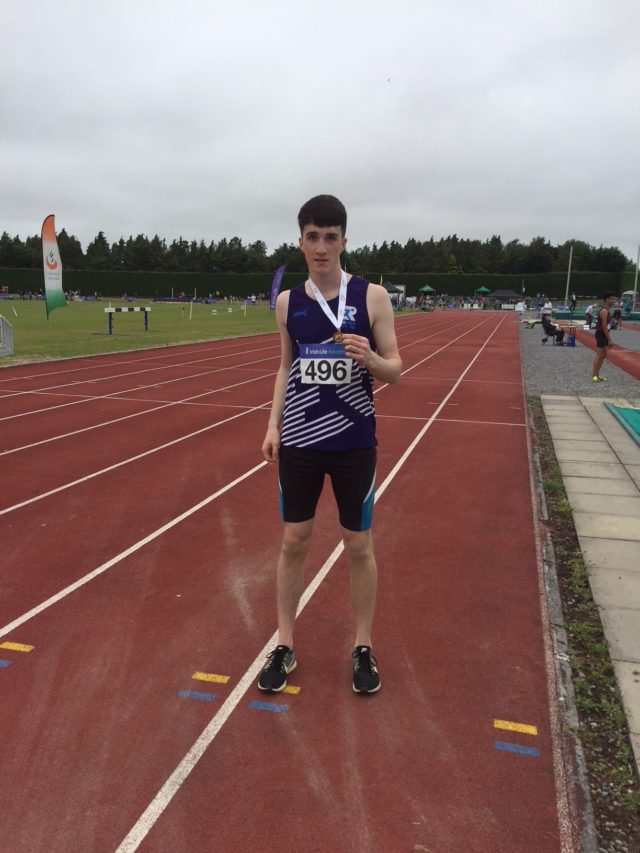 Emo Rath athlete Eoin Keenan brought the curtain down on his juvenile athletics career with another gold medal winning performance, this time in the boys under nineteen triple jump.

He was competing in the Juvenile Track and Field finals in Tullamore.

Eoin only took up triple jumping this year, making the win even more impressive.

Four times during the event he passed his previous best of 12.78m, culminating with a gold medal winning jump of 13.25m and 34cm ahead of the second placed athlete.

Other Laois athletes competed in the finals such as Ava O’Connor, who runs with the Tullamore Harriers. Ava had a very busy weekend, as on Saturday she was apart of the Irish schools team which took part in the SIAB games in Scotland.

She secured a a fifth place finish in a competitive Girls U-16 1500 m race, which helped Ireland to a silver overall team medal in the championships.

She made it to Tullamore Sunday after her flight and claimed another silver medal in the U-16 1500m.

St Micheal’s AC sprinter John Ikpotokin was also on the podium as he finished third in the Boys U-14 200m, and also won bronze in the 80m earlier in the month.

Ger Kelly from St Abban’s also won the bronze medal in the U-19 hammer with a throw of 42.88m.

Laois also had two athletes in the Girls U-16 200m final. Grainne Lalor from Rosenallis-Kilcavan AC and Helen Ikpotokin from St Micheal’s AC were flying the flag for Laois.

Helen narrowly missed out on a medal in fourth place, as did Grainne who came sixth.

They will be hoping more athletes can now follow in Eoin’s footsteps.