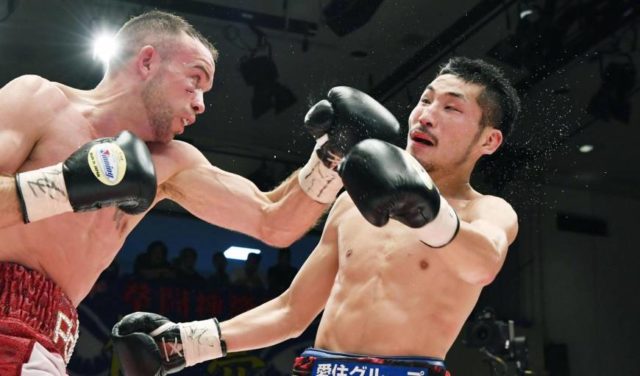 Against all the odds, TJ Doheny became a World Boxing Champion this afternoon.

The Portlaoise native, who resides in Australia, defeated the reigning champion in a fight in Japan.

He took on Ryosuke Iwasa in the 2,000-capacity Korakuen Hall.

Doheny battled bravely throughout and won with all three of the judges scoring the bout in his favour.

Doheny looked in trouble early on as a shot from Iwasa drew blood pouring from a massive cut under his eye.

But he battled on and executed a number of perfectly timed shots to the head and torso of the Japanese man.

And the good people of Twitter were on hand to react in a brilliant way:

Did your town and your country proud TJ…legend! @TjDoheny ???? #Worldchampion

Get in there @TjDoheny fantastic result!! Another Irish World Champion!! ??

This week, 10 years ago, TJ Doheny wanted to be at the Beijing Olympics but missed out to John-Joe Nevin. Moved to Australia, built a career up from the ground. Fair play to him.

Get in there @TjDoheny …world champion. Go on the town

@TjDoheny 世界チャンピオン/World Champion. So proud of you. Dreams come true! Come on the Town!

One of my brothers closest buddies in Sydney over the past 7 years, TJ Doheny, has just become a world champion. Amazing. #tjdoheny #ireland #boxing #worldchamp

Unbelievable achievement from @TjDoheny another world champion among these shores!!

Congratulations #portlaoise boxer @TjDoheny on your world title win this morning! ?????? celebration cake for you from Kelly Lou’s when you’re next home! ??

Hopefully people will show an interest in real Irish fighters now and forget about the likes of McGregor.

Well done @TjDoheny all your hard work and dedication has payed off, World champion from Portlaoise some achievement ??