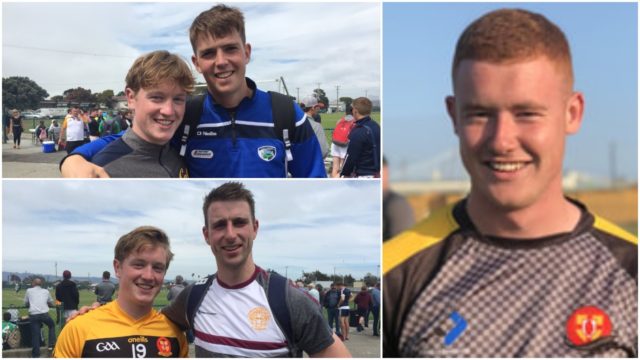 A number of Laois footballers will be bidding for championship glory across the Atlantic today.

Three Portlaoise men will be in action while a Portarlington man will also be involved in one final in San Francisco while there is also Laois interest in the finals in Boston and Chicago.

Frank Flanagan, John Kavanagh and Colm Murphy will all line out for Ulster Club San Francisco in the decider.

Their opponents will be Young Irelanders and they have Stuart Nerney of Portlaoise in their ranks.

The lads from Ulster Club San Francisco made headlines during the week when they published their profiles where they decided to have a bit of craic with their occupations.

John Kavanagh said he was a potato peeler, Colm Murphy is a cheese expert while Frank Flanagan described himself as a student nurse.

Nerney has been in fine form for Young Irelanders and he scored two goals in their semi final win to book his sides’ place in the final.

Meanwhile, The Heath will be represented in the Chicago final which also takes place today.

Goalkeeper Joe Walshe will represent Wolfe Tones in the senior final against McBride’s, a side that will have Mayo senior players Conor Loftus and Diarmuid O’Connor in their ranks.

Elsewhere, arguably the highest profile final takes place in Boston where two Portarlington men will be with the Aidan McEnespies club as they take on a high-profile Donegal Boston outfit.

Robbie Pigott and Jake Foster are with McEnsepies who meet a Donegal Boston side that will have Dublin’s Diarmuid Connolly and Carlow’s Brendan Murphy playing with them.

Murphy and Pigott famously clashed during the Laois-Carlow Division 4 league final this year with their battle spilling over into social media after the game when Pigott joked about the win on Instagram leading to Murphy then taking to twitter to voice his frustration.

The winners of the respective finals go forward to the North American finals next weekend – and most players are expected back in their club colours in the coming weeks.

Round 3 of the Laois SFC as well as the relegation semi-finals take place next weekend.