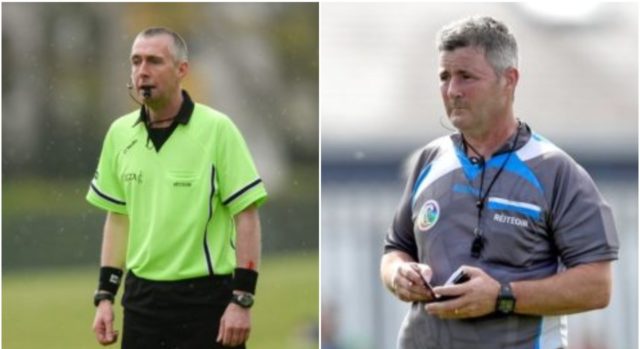 Two Laois men have been appointed to referee All Ireland finals in the coming weeks – with Niall McCormack and Alan Doheny set to take charge of ladies football and camogie deciders respectively in Croke Park.

The TG4 All-Ireland Ladies junior football final between Louth and Limerick will be refereed by Niall McCormack, who hails from the St Conleth’s club in Laois and has had a strong involvement with O’Dempsey’s GAA over the years also. A regular as a referee on the ladies scene for a number of years, including trips abroad to officiate at games, this will be his first All Ireland.

Castletown native Alan Doheny will be refereeing the All-Ireland junior camogie final between Dublin and Kerry.

This will be third All-Ireland referee’s medal to receive this year, as he also refereed the minor ‘B’ camogie championship between Antrim and Westmeath.

He has also previously been part of match official teams for multiple All-Ireland Finals at various levels.

We spoke to Alan ahead of his Croke Park refereeing debut about how he got involved in being the man in the middle of the pitch.

“This will be my fifth All-Ireland and my first time in Croke Park.”

When asked about his he had any pre-match jitters before the day, the Naomh Eamann clubman said that he hasn’t felt them yet but that he is looknig forward to the day.

Alan will also be heading up to the hallowed grounds on Jones Road to partake in Hawk Eye training next Wednesday.