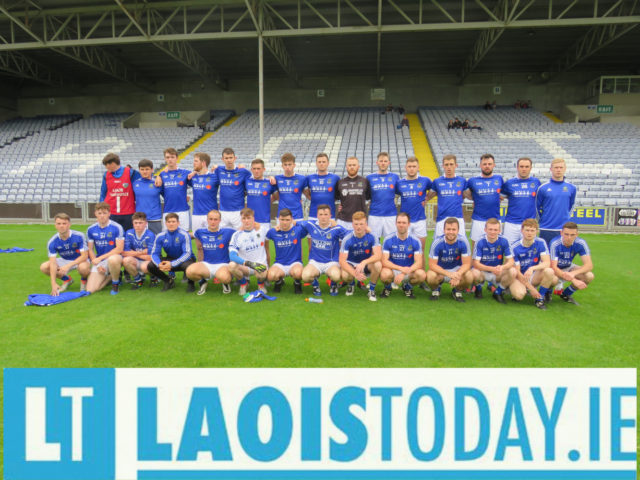 Mountmellick Gaels’ march for immediate promotion to the SFC continued as they ran out comfortable winners over Rosenallis in O’Moore Park this evening.

Alan George’s men, who were relegated from the senior grade last year, are now set for a re-match with Courtwood who defeated them in Round 1.

Both sides were guilty of kicking wides in the opening stages of this one but Colm Poole got us underway for Rosenallis before Darragh Hanlon equalised for Mountmellick.

We then had two goals either side of the tenth minute. The first came for Mountmellick when Darragh Hanlon showed neat hands to square the ball to Mark Grennan who fisted it in at the back post.

But Rosenallis went straight down the other end and tied the match. Marcus Redmond ran with the ball from inside his own half and bounced off several defenders before laying it off to Jack Friel who rattled the net.

Eoin Dunne and James Mullaney traded efforts to leave up level at 1-2 each at the midpoint of the half before Mountmellick took over.

Niall Mullen, Karl Donoher and James Mullaney all pointed to put five between them as we approached half time.

The final score of the half came via Colm Poole for Rosenallis but they trailed by 1-7 to 1-3 at half time and faced playing into the wind in the second half.

Rosenallis introduced John Lennon and Ronan Murray at the break and the former kicked a delicious point off the outside of his boot from in front of the stand 50 seconds after coming on.

Mountmellick responded well though with points from Niall Mullen, Eoin George, James Mullaney and Brendan Reddin to ease eight clear with 38 minutes on the clock.

This time it was Darragh Hanlon who found acres of space in front of the Rosenallis goal and he slammed the ball beyond Barry Farrell.

Both sides could have had more goals but Eoghan Keogh denied Brian Fitzpatrick and Barry Farrell did the same down the other end to thwart Darragh Hanlon.

Colm Poole kicked his third free for Rosenallis and an Eoin Dunne effort left eight between them as we entered the final quarter.

Mountmellick kept scoring though as Niall Mullen landed another free and keeper Eoin Keogh popped up with a 45.

Mountmellick added another point from sub Conn Maher as three minutes of added time were announced.

Rosenallis were awarded a penalty in that time when Eoin Dunne was fouled which Ronan Murray took but Eoghan Keogh did brilliantly to deny him and then thwart the rebound as well as Mountmellick won by eleven in the end.