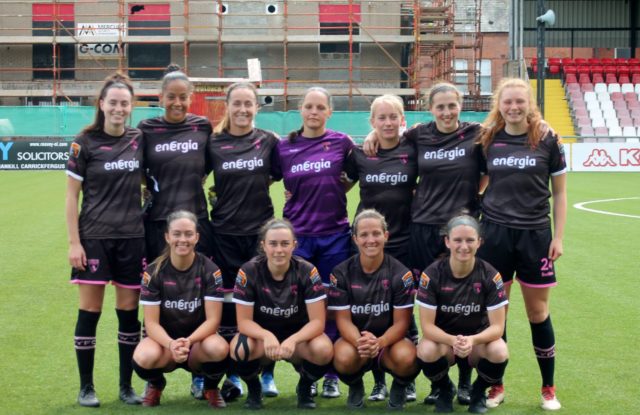 Three Laois women are aiming to complete a magnificent feat – do secure a league and a cup double this weekend with their Wexford Youths side.

Kylie Murphy, Orla Casey and Ciamh Gray (formerly Dollard) are all lining out for the Wexford Youths as they face Peamount United FC in the FAI Cup Final in the Aviva Stadium on Sunday November 4 at 12.05pm.

Graiguecullen native and captain of Wexford Youths side Murphy has been amassing the honours this week – as she was also nominated for senior player of the year in the Women’s National League.

Murphy has been captain for the side for seven years – and she is joined by young Abbeyleix star Orla Casey and goalkeeper Ciamh Gray.

Big match days are not uncommon for this dynamite trio – they took on some of the juggernauts of European women’s soccer earlier this year in the Champions League.

Gray joined the side this year and has previously served as a GAA goalkeeper for the Laois Ladies for an incredible 10 years.

The Portlaoise native was also previously involved in the Irish setup from U15 up to U19.

She previously said that  the level of professionalism and the support given to her by her career in the Defence Forces makes the opportunity of playing in the champions league even greater.

“The level of professionalism is amazing. Doctors and physios at all of our trainings, hot meals afterwards, we’re just well looked after.

“I’m very lucky too that the Army faciliate people playing sports. They take great pride in their members playing sport at a high level, they’re very accomodating,” she added.

Check out a great interview with captain Murphy below as she talks about tenacity and never giving up.

Best of luck tomorrow to Kylie, Orla, Ciamh and all the Wexford Youths side!

“We’re relentless, we don’t give up. The more people put us down, the more we’re going to fight back…” ?

Back from the brink, @YouthsWomen skipper @Murphy10Kylie is ready to inspire at the @AVIVAStadium once again…