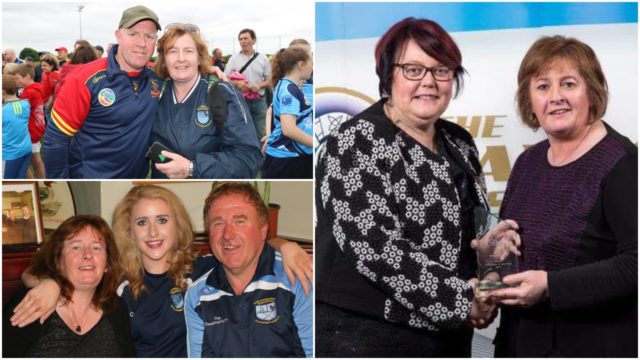 In the run up to this weekend’s Leinster intermediate camogie semi-final, we decided to take a look at not only the players involved in the meeting of O’Moores and Young Irelands Gowran (Kilkenny), but also those behind the scenes.

Mary Conroy has been involved in O’Moores camogie club since its foundation and was honoured as the Laois camogie Volunteer of the Year in Croke Park in February of this year.

Mary hails from Rosenallis and has been the driving force behind the O’Moores Camogie Club for the past 15 years. She worked as secretary for the 13 years, working tirelessly behind the scenes to make the club successful.

Mary was commended for going above and beyond her call of duty in attending club and county meetings, answering emails/texts/phone calls and going to training sessions no matter what.

Like many GAA patrons, Mary could been seen washing jerseys, looking after all the training equipment, making tea and sandwiches after training and being one the loudest voices on the sideline.

Mary’s daughter Casey is highly involved in the club, but Mary was described as being, “as mammy to every girl in the club”.

During her time as secretary for O’Moores she was also involved with the Laois County Board as treasurer and assistant treasurer.

Mary took a small step back in 2017 from O’Moores in 2017. She has continued in her role as assistant treasurer with Laois and played a huge part in the Laois Executive Committee in 2017.

In 2018, she has took on the role of Vice Chairperson on the Laois County Board.

Mary is described as being, “An inspiration to young and old in O’Moores Camogie Club. She has a heart of gold and gives so much time and commitment to her club and county. She truly deserves to be Laois Volunteer of the Year.”

As well as her involvement in camogie, Mary also gives a contributes massively to Rosenallis GAA. She has been treasurer for Rosenallis GAA for a number of years also.

O’Moores are out against Young Irelands Gowran of Kilkenny in the Leinster intermediate semi-final in Rosenallis on Sunday, November 11 at 1.30pm.