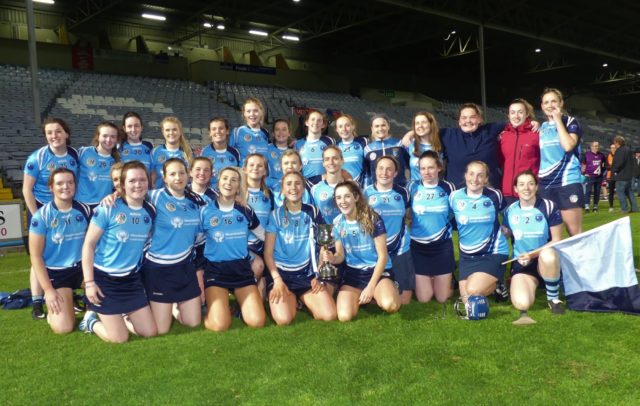 The rain cleared in Rosenallis in time for the Intermediate Leinster camogie semi-final where O’Moore’s were unlucky to lose out to Kilkenny’s Young Irelands.

Despite a great performance from the Laois side, it was Young Irelands who advance to the Leinster Final following a three point win.

Young Irelands were first on the scoreboard in the fourth minute with a free but Niamh Gleeson cancelled out the score minutes later.

Erin Murray split the posts for the home side to put a point between the sides and it was Mary Keating who leveled the game in the 17th minute with a free.

Quinlan and Ciara O’Keeffe pointed for the away side before O’Moore Amy Loughman brought the gap back to a point.

A Young Irelands point in the last few seconds of the first half left the half time score at 0-4 to 0-6 in favour of the Kilkenny women.

The second half had supporters biting nails but a strong start gave the O’Moore girls a leap of confidence.

A super ball in from Laura Peake saw Young Irelands goalkeeper, Hannah Brennan, bat the ball down but Erin Murray was there to place it in the back of the net to draw the game in the second minute.

Joyce Dunne showed great leadership for the Laois side a pointed to put O’Moores ahead for the first time in the game.

Keating again raised the white flag but the next three scores came from Young Irelands leaving them a point up in the 54th minute.

O’Moore’s centre back, Alison McEvoy, scored a super free to draw the game with 5 minutes to go but despite great efforts, Young Irelands powered through the closing minutes scoring three unanswered points in a row before the final whistle.

The defeat means O’Moores bow out for this season after a heroic championship campaign.

But it is one that Dermot McGill’s side can look back on with pride as they won just their second ever Laois title and got through two rounds of the Leinster championship before today’s defeat.