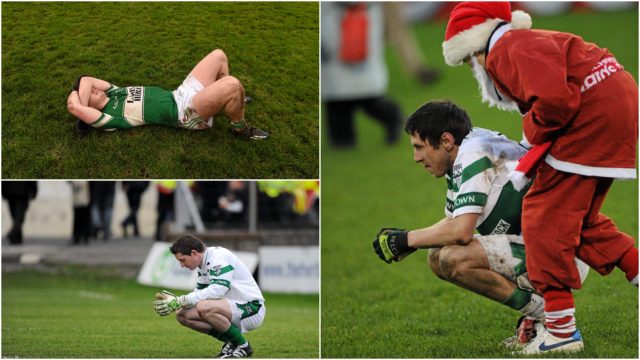 This Sunday, the Portlaoise footballers will board their team bus and head for Parnell Park for a mouth-watering Leinster Club SFC semi-final against Dublin champions Kilmacud Crokes.

It promises to be a great game as Malachy McNulty’s men bid to reach a second Leinster final in four years.

The Dublin champions have proven a considerable stumbling block for Portlaoise during the last ten years so.

While Portlaoise beat Kilmacud in 2004, they have since played the Dublin champions on seven different occasions and have lost each time.

With the exception of St Brigid’s in 2011, each side have been crowned Leinster champions. Vincent’s, Crokes and Ballyboden have all won the All Ireland and Ballymun were only narrowly beaten in the 2013 final.

Ballymun in 2012, Vincent’s in 2013 and Ballyboden in 2015 have all beaten Portlaoise in Leinster finals. While it has been a heart-breaking run of results for the Laois side, the tight nature of the contests show just how close Portlaoise have been.

They have won Leinster titles in 2004 and 2009, but from 12 provincial campaigns, they would have liked to have won more.

Ahead of Sunday’s game, we look back at their battles with the Dublin winners since 2007.

The scoreline in this one didn’t do Portlaoise justice. On their first foray outside of Laois since their Leinster-winning campaign three years earlier, Portlaoise, under the management of Karl Lenihan, went down to a St Vincent’s side that would go on to win the All Ireland the following March.

Portlaoise had a disastrous start, conceding two goals in the opening nine minutes and then had Zach Tuohy, then still a minor, sent off five minutes before half time.

Portlaoise fought back well though and were level coming up to the break, their goal coming from a brilliant Kevin Fitzpatrick finish.

Portlaoise had a couple of great goal chances early in the second half but Peter McNulty (RIP) hit the crossbar and Fitzpatrick forced a save out of Michael Savage.

Portlaoise did get level again but Vincent’s powered on in the final quarter, hitting 1-8 without reply to run out comfortable winners in the end.

Tipperary’s Hugh Coughlan, who would later transfer to play with Portlaoise, was midfield for St Vincent’s that day while future Dublin manager Pat Gilroy scored 1-1 from full-forward.

Portlaoise came into this game as Leinster club champions having won the provincial title the previous year only to lose to Clare side Kilmurry-Ibrickane in the All Ireland semi-final.

Portlaoise got off to a dream start and led 2-4 to 0-3 early on thanks to goals from a Paul Cahillane penalty and a fisted effort from Tommy Fitzgerald.

But Kilmacud turned things round in the second half and a 58th minute goal from Declan Kelliher ensured the win.

Kilmacud then beat Rhode in the Leinster final before losing to eventual champions Crossmaglen in the All Ireland semi-final.

It was extra time heartache for Portlaoise in 2011 as an epic in Parnell Park ended with St Brigid’s as narrow winners.

Colm Parkinson got a goal for Portlaoise in the opening half but the sides were level 1-6 apiece at the break, two of St Brigid’s points coming from Laois player John O’Loughlin.

Brigid’s were 1-12 to 1-10 up with ten minutes remaining but points from Craig Rogers and Brian McCormack levelled it only for Barry Cahill to edge Brigid’s ahead in injury time, despite protests that he had overcarried the ball. There was still time for a late equaliser and Barry Fitzgerald held his nerve to send the game to extra time.

The sides were still level 1-15 each at half time of extra time but Brigid’s made a break for it and a late goal sent them into the Leinster final, a game they’d lose narrowly to Garrycastle from Westmeath.

Ballymun Kickhams got the better of Portlaoise in 2012 – a hard-fought battle in Mullingar.

Portlaoise trailed 0-6 to 0-2 at half time and 0-9 to 0-3 early in the second half but Portlaoise finished strongly, led by Cahir Healy and Kevin Fitzpatrick, who had come on as a sub at half time.

Ballymun had Dublin players Dean Rock, Philly McMahon and James McCarthy all in central positions while John Small came on as a sub. There was Laois links too with former Mountmellick and Laois underage player Sean George coming on as sub. Corner-forward Shane Forde was a Mayo native who transferred to The Heath this year.

Ballymun later went on to narrowly lose the All Ireland final to Roscommon side St Brigid’s on St Patrick’s Day.

An absolute cracker of a game in Tullamore with St Vincent’s edging out Portlaoise thanks to late points from Diarmuid Connolly and Tomas Quinn.

Portlaoise were under Mick Lillis at the time and looked in bother early on when they trailed 2-4 to 0-4.

But Craig Rogers got two brilliant goals – one from a penalty after being fouled himself – and the sides were level 2-5 apiece at the break.

Brian Glynn scored a goal to put Portlaoise four up early in the second half but St Vincent’s rallied and finished stronger to get over the line.

The 2014 meeting of All Ireland champions St Vincent’s and Portlaoise was one of the rare occasions when Portlaoise didn’t push the Dublin champions all the way.

Played in O’Moore Park, the visitors raced nito a 1-2 to 0-2 lead after just five minutes and although it was 1-4 to 0-6 at the break, two second-half goals from Shane Carthy got Vincent’s over the line.

Vincent’s went on to win Leinster but lost to Derry champions Slaughtneil in the All Ireland semi-final. An interesting feature of the game was a young Graham Brody being introduced as a second-half sub for wing-forward Gareth Dillon.

The most heart-breaking one of them all. Another thrilling Leinster final for Portlaoise but another loss, as Aran Waters proved the Ballyboden hero with an injury time winner.

Portlaoise had looked in a good position when they led by two points entering the final ten minutes and could have wrapped it up only for Donegal keeper Paul Durcan tipping a powerful Brian McCormack pushed on to the post.

Colm Basquel equalised for Ballyboden before sub Waters got the winner. Paul Cahillane had a late chance to level things for Portlaoise but his free drifted wide and Ballyboden won the provincial title for the first time, becoming the fourth Dublin winner in a row.

They later went on to beat Castlebar Mitchells in the All Ireland final on St Patrick’s day.