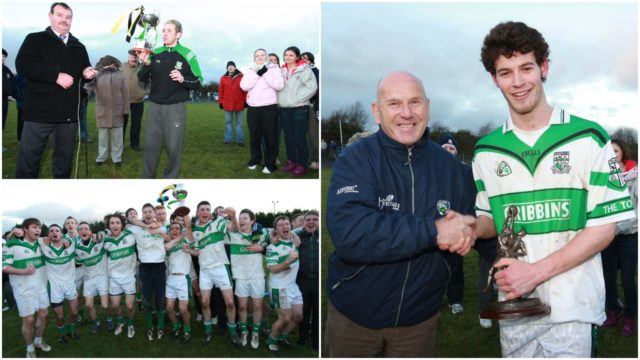 Portlaoise made it nine U-21 football titles in 12 years with an exciting final victory over The Heath Gaels in a closely contested game in Timahoe ten years ago.

This game was played a year later than it should have been after the whole competition was delayed after St Joseph’s-Barrowhouse and Portlaoise’s semi final was abandoned after a massive row.

The Heath Gaels technically already had their hands on the trophy at one point when both Portlaoise and St Joseph’s-Barrowhouse were thrown out of the 2007 edition.

But they were later reinstated and a replay was played a week before this game in December 2008, with Portlaoise winning easily on a score of 3-11 to 0-7.

The Heath Gaels were forced to play over half the game with 14 players as midfielder Cathal Og Greene was sent off late in the first half.

This was a major setback for The Gaels as Portlaoise took full advantage of the extra man.

Portlaoise played the extra man in front of The Heath’s danger man Daithi Carroll, starting every attack in their own half back line with the constant overlap causing problems for The Gaels.

Adrian Kelly put on a fantastic display in midfield, dominating all the aerial duals.

Portlaoise were always in front over the course of the game but The Heath stayed within touching distance all the way through.

The Gaels had good performers on the day with the best coming from Daithi Carroll but it was to be Portlaoise man Cahir Healy who put in a fantastic performance at centre back.

The Heath had a few goal chances to try and break Portlaoise hearts but Portlaoise held out and put the name on the cup for a ninth time in 12 years.

Check out some brilliant Alf Harvey pictures from the game below: