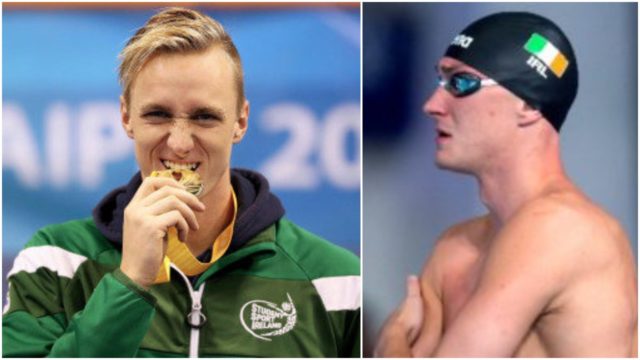 Shane Ryan is through to the final of the men’s 50 metres backstroke at the World Short Course Swimming Championships in China.

Ryan broke the Irish senior record twice today. Once in the heats to qualify second for the semi-final.

Then again in the semi-finals, earning a time of 22.96 seconds, cutting a further 0.07 off the record set in his earlier heats.

“I came in and I was very relaxed, I knew what I needed to do and I knew I could do it,” Ryan told RTÉ Sport.

“I had the support to do it and I had to try get my hand on the wall. For tomorrow night I have to try and do the same thing, clean it up and do it a bit quicker.

“For me I try and do 30 meters under water, that’s why I love short course because I am decent under water, if I nail those under water swimming is going to come easy.”

Shane was born in Amercia, but declared for team Ireland through his father Tom, who is from Portarlington.

He goes up against Russia’s Evgeny Rylov in the final tomorrow at 12.30pm Irish time, where he is hoping for a top three finish.

This is not the first incredible achievement for the young man.

He won the gold medal in this event at the 2017 World University Games and added a bronze this past summer at the European Championships.

Ryan also made the long list of the RTÉ Sportsperson of the Year, alongside fellow Laois man and world champion boxer TJ Doheny.