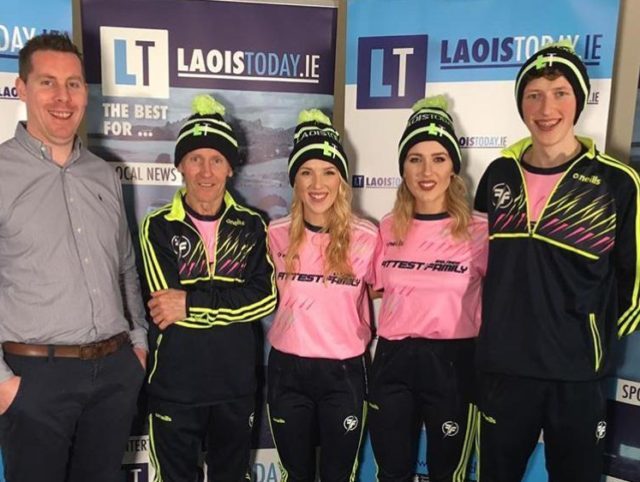 The McDonalds have finished in second place in the whole of Ireland’s Fittest Family after gallant efforts in the final and strong performances throughout the course of the series.

Martin, Breda, Kate and Cian have filled the county with pride (and a few tense moments) as they battled through bog, ropes, tyres and outdoor terrain to make it from 40 families down to the final four.

They were cruelly defeated at the very last hurdle by seconds by the Coney family.

An ideal start to the competition was made all those weeks ago, as they earned first place in the beach run out of 40 families.

They even set the family record on the combined time in ‘Hanging Tough’.

Sixty-two year old Martin recorded the all-time highest score in the ‘Hanging Tough’ challenge – where he used his upper body strength to hold onto a bar six metres, or 20 feet, above the Irish Sea for an incredible 5.50 minutes.

People all over Laois were anticipating the grand finale tonight, and were treated to an amazing display by the McDonalds.

Here, they took on Limerick natives the Lawlors, the Finnegan-Hogans from Cork and the Coney family from Tyrone in Croke Park.

“Today as a finalist, I suppose you could say it’s the greatest feeling so far in the competition,” said Cian.

A series of extreme challenges faced each family.

The first challenge saw each family member run to the Cusack stand one at a time to climb a rope ladder to collect a flag at either 10, 20, 30 or 40 metres.

Once all four family members get back that is their finished time.

The McDonalds came in third due to a rule infringement by the Finnegan-Hogans.

For the next challenge, titled ‘The Sands of Time’. On the start line there were 16 sandbags weighing 10 kilos each. The families had to move the sandbags through an obstacle course and 26 steps up the Cusack stand.

They registered 4.03 minutes in the challenge which left them in an eliminator with the Finnegan-Hogans.

For this, the had to climb 600 metres up the Cusack stand with a log. The McDonalds athleticism showed and they finished first across the line to make it to that final three.

For the final challenge – Hanging Tough awaited the families once again. However this ‘hanging’ was from 40 metres off the top of Croke Park.

The McDonalds stayed up for a combined time of 8.16 minutes to make the grand finale against the Coney family.

You could say that the McDonalds defied the odds, being the only family with two women in a final place.

However Kate and Breda proved they were more than worthy competitors all along the series, particularly in last week’s bog run – and have provided inspiration to every young girl and boy in county Laois.

A huge well done to the McDonald family and thank you for representing Laois so magnificently throughout the course of the series.