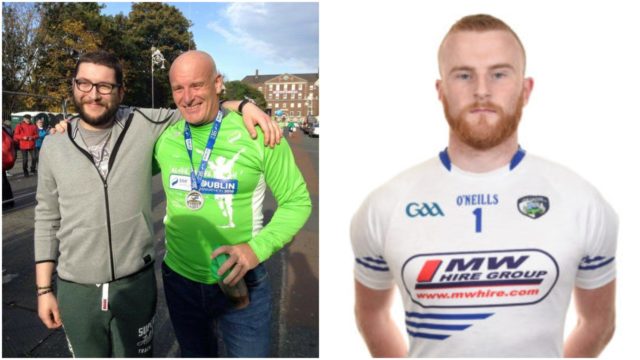 Two Mountmellick men took on the brave challenge of two marathons in the space of a week to raise much needed funds for  bone marrow for Leukemia trust.

They aimed to raise funds in honour of Rory Hyland following his battle with leukemia and they did so with great pride.

Completing one marathon is a extraordinary challenge, but to run two within the space of a week on two different continents is something else altogether.

But that’s exactly what Mountmellick man Phil Keogh plans to do. His son, Laois senior footballer Eoghan, will run with him in the first of the marathons – which takes place in Ireland.

On Sunday, October 28 Phil and Eoghan will be running the Dublin city marathon. Seven days later Phil will be flying over to America to run in the New York City marathon on Sunday November 4.

In memory of Rory

They are running in both marathons in memory of Rory Hyland.

Rory, son of Michael and Fiona Hyland, passed away in February 2017, after a seven month battle with a rare form of Leukemia.

The Keoghs’ aim is to raise much needed funds for the Bone marrow for Leukemia trust.

This charity is close to the hearts of the Hyland family and it receives no funding from the HSE or any other state agency.

“I put my name into a hat for the New York City marathon. I didn’t think I would get picked but I did, it just turns out it’s on November 4!” laughed Phil.

However the Mountmellick man is no stranger to marathons himself. He ran his first-ever marathon after Rory was diagnosed with Leukemia in 2016.

Since then, he has run a phenomenal four marathons and eight half marathons.

Phil has set up an Everydayhero page to raise money for bone marrow for Leukemia trust. On the page, he said: “Unfortunately Rory is no longer with us as he passed away.

“This has inspired me to keep running and challenge myself further, for the memory of Rory who will never be forgotten by all who loved and admired his strength and courage, which he showed right to the very end of his very short life.”

The staggering 84km challenge doesn’t phase Phil. “Most of it is all in your head. The training is grand – I’m not putting in the big miles right before the first marathon.

“I ran 20 miles last Monday and ran the Laois leg of the 32 marathons in 16 days challenge,” explained Phil.

Another Laois man, Paul Allen, completed 20km in memory of Rory in the Royal Parks half run in Hyde Park, London, last weekend.

Phil has asked for people to donate as much or as little as they can for bone marrow for Leukemia trust.

He has set up a page for donations which can be found here.