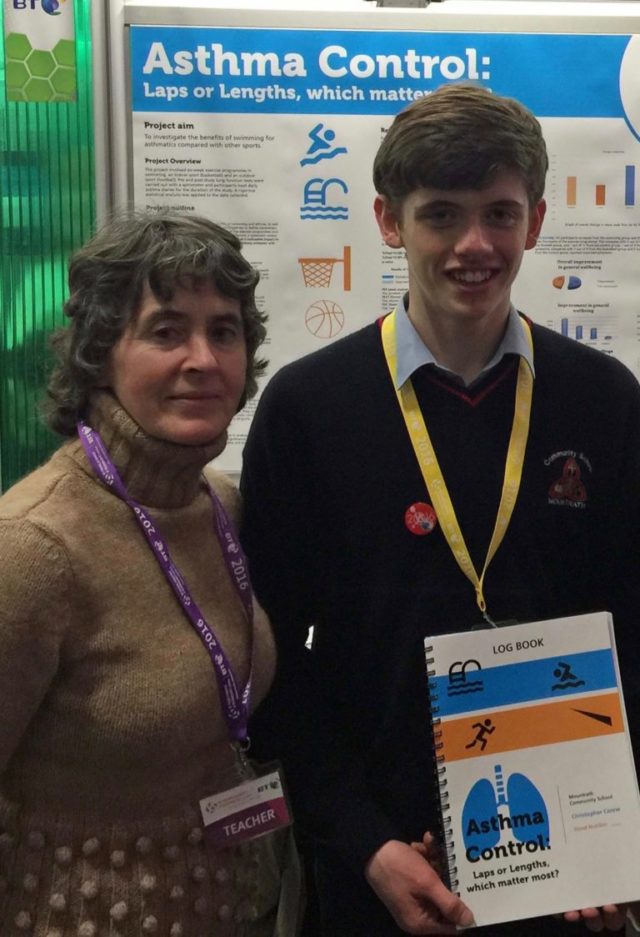 In March of this year a young Laois man recorded an incredible feat of having his research paper published in a medical journal.

Then 18 year old Carew, who recently turned 19, has certainly been fulfilling his enormous potential and has gone on to achieve incredible honours since then.

He was one of three Laois students who earned themselves 625 points in this year’s Leaving Cert.

The Portlaoise teenage was then rewarded for his incredible Leaving Cert results by UCD – where he is currently studying medicine.

Plenty of even more great things to come from this young man!

Mountrath Community School student Christopher Carew has been granted the highly unusual honour of having a research paper published in a medical journal.

“Laps or Lengths?  The effects of different exercise programmes on asthma control in children” was accepted for publication in The Journal of Asthma following a rigorous review process.

The highly regarded Journal of Asthma is an international, peer-reviewed journal which publishes original clinical research around asthma and related conditions.

Eighteen-year-old Christopher, who will sit the Leaving Certificate in Mountrath  in June, co-wrote the scientific paper with Dr Des Cox, Head of Department/Consultant in Paediatric Respiratory Medicine at Our Lady’s Children’s Hospital, Crumlin, Dublin.

The lengthy journey to having the paper published began when Christopher was in Transition Year and entered a project into the BT Young Scientist competition called “Asthma Control: Laps or Lengths, which matter most?”, for which he won not only a category award but also a bursary from the Irish College of General Practitioners.

It compared the benefits of swimming for asthmatics with other sports, and concluded that while all exercise is of benefit, swimming is the sport which is most beneficial.

The research question was answered by carrying out a six-week trial, involving 43 participants comprising of a control group and three exercise groups, followed by rigorous statistical analysis of data collected.

Participants for the trial were found through Mountrath CS, Timahoe NS and through Portlaoise GP Dr Deirdre Honan.

The exercising groups took part in basketball, football or swimming programmes. Throughout the six weeks each participant kept an asthma diary, recording symptoms, inhaler use and peak flow rates. Spirometry testing was also carried out at the beginning and end of the trial.

When Christopher shared his findings with Dr Des Cox, the Respiratory Consultant was so impressed that he suggested submitting a paper to a medical journal.

“Christopher was a pleasure to work with, “ he said. “He is an outstanding student who has a very bright future ahead of him.”

This is a great honour for the school – not only for Christopher Carew and for science teacher Dr Kelly, but also for the Mountrath CS students who participated in the six-week trial, without whom the research data could not have been gathered.