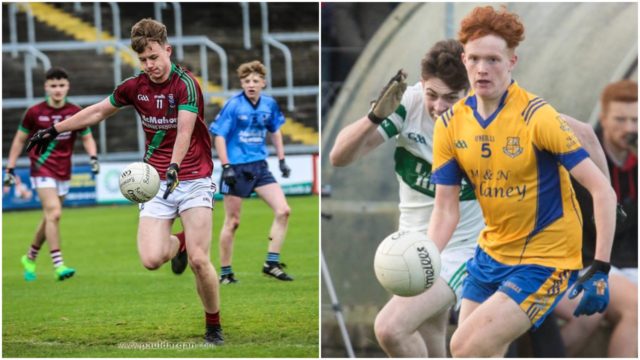 Portarlington and St Joseph’s will meet in the U-21 football final in Stradbally at 1.30pm.

The competition was delayed starting in 2018 due to the introduction of an U-19 competition which meant the U-21 didn’t actually begin until December.

This scenario will not be repeated in 2019 though as it has been decided the discontinue the U-19 and U-21 grades and replace them both with an U-20 grade.

Portarlington began their campaign on December 1 when they defeated Sarsfields by 1-18 to 1-6 in the quarter final.

They had to wait until January 6 to play again as their opponents in that game, Portlaoise, had their initial quarter final game against Graiguecullen abandoned following a serious injury to a Graigue player.

Portlaoise won the refixture but Portarlington were once again far too strong in the semi final as they win by 2-15 to 1-5.

They faced Stradbally Parish Gaels in the quarter final on December 21 and won by 3-14 to 1-12.

Their semi final also took place on January 6 where they got the better of Ballyroan-Abbey by 3-9 to 2-9 in an entertaining game.

St Joseph’s have a number of very experienced players in their ranks with the majority of them having played senior football in 2018.

James Kelly, Jack Lacey, Brian Daly, Dean Brophy, Mikie Dempsey, Conor Kealy and Peter Kealy all played for their seniors this year while some of them were part of the 2015 and 2016 squads that won U-21 championships before.

However, they are set to be without influential forward Dylan Doyle for the final as he was shown a straight red card in the latter stages of the win over Ballyroan-Abbey – having scored 2-1 before then.

As for Portarlington, all bar three of their players played for the seniors last year. And the three of those, Cathal Bennett, Sean Michael Corcoran and Daragh Galvin, did not do so because they were U-17 and too young.

Portarlington won this title last year by defeating Graiguecullen in the final and just three players from that team are overage here.

Portarlington have breezed through this U-21 championship so far and while this game will most likely be closer, they should be the ones celebrating this afternoon.

We will be live from Stradbally from 1.30pm on our Live Blog to bring you all the action as it happens.