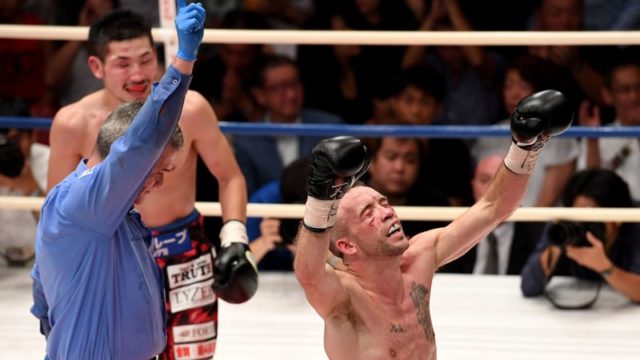 The Knockmay man has held onto his Junior Featherweight world title by defeating Ryohei Takahashi in the Madison Square Garden tonight.

The undefeated Doheny was hotly tipped to regain his crown at 1/50 and gave the crowds at home and abroad a match to get excited for, seeing off his Japanese foe Takahashi with ferious skill, boxing intelligence and stellar accuracy.

Doheny won in the 11th round after the referee stopped the contest as the Portlaoise man connected with numerous consecutive shots.

Elavated to another level after earning the world title, the Portlaoise Southpaw was accurate from the start and took the centre of the ring early in the first round.

‘The Power’ clocked clever body shots throughout. While a head clash left both Doheny and Takahashi with cuts on the nose bleeding considerably in the second round, Doheny spurred on with a first class performance.

Landing more body shots and two uppercuts in the second round, Doheny’s class and experience shone through as his Japanese opponent lunged at the Portlaoise man.

Doheny knocked his opponent to the ground in the third round, further showing his professional pedigree against his competitor.

Continuing with some stellar left hooks, he landed clean, neat shots during the rounds and taking over the fight.

Takahaski hit a small purple match in the eighth round, chipping away in an unorthodox style as the fight intensified.

However Doheny was winning the fight comfortably and went into the final rounds putting a stamp on his world title.

The 32-year-old’s road to here has been nothing short of incredible. His record now reads as follows: 21 fights, 21 wins, 14 knockouts; 15 fights in Australia, four in the United States, one in Thailand, one in Japan, none at home.

The fight against Ryosuke Iwasa went the full 12 Rounds where Doheny won on the judges decision on points in the 2,000-capacity Japanese stadium.

Before earning the title, Wayne McCullough was the only fighter from either Ireland or the UK has ever won a world title on Japanese soil.

Doheny’s win meant he became the 21st Irish world champion and only the second ever Irishman after Jimmy McLarnin in 1933 to attain champion status without ever having fought on his native soil.