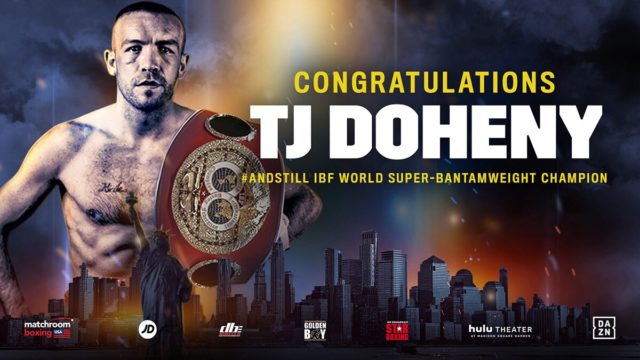 The Knockmay man defeated Ryohei Takahashi in the Madison Square Garden in the first defence of the belt he won back in August last year.

Doheny won in the 11th round after the referee stopped the contest as the Portlaoise man connected with numerous consecutive shots.

Elavated to another level after earning the world title, the Portlaoise Southpaw was accurate from the start and took the centre of the ring early in the first round.

‘The Power’ clocked clever body shots throughout. While a head clash left both Doheny and Takahashi with cuts on the nose bleeding considerably in the second round, Doheny spurred on with a first class performance.

Speaking afterwards, Doheny reflected on a difficult fight which left him with a cut above his eye and plotted his next move.

He said: “Every time I hit him, I felt I was hurting him. He was getting himself into some really safe spots and I was finding it difficult to catch him.

“The main thing is, we got the stoppage in the end and we move on now.

“It is not a TJ Doheny fight without a cut. Every time I always come out with scratches and bruises because I give it my all and put on a show for the fans.”

American boxer Daniel Roman is currently the WBA super bantamweight champion and Doheny wants the opportunity to unify the belts.

He said: “Daniel Roman is a great fighter. He has the WBA belt and I have the IBF so let’s make it happen.”

Roman then appeared on stage and called for the same.

Doheny then said to his promoter Eddie Hearn – “Eddie you heard it, you got the order from the fighters, let’s go.”