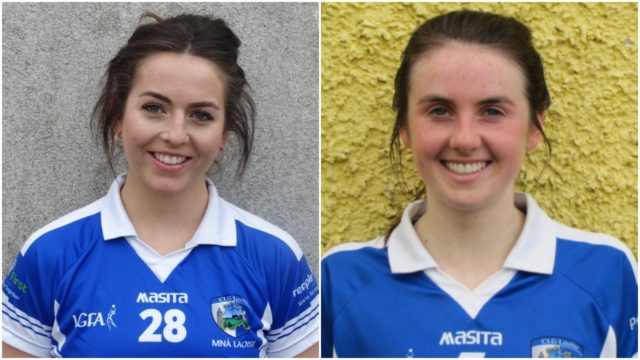 Two co-captains have been announced for the Laois ladies panel for 2019.

St Brigid’s and Ballintubbert native Jane Moore and Park-Ratheniska defender Anna Healy have been announced as the two co-captains for the year.

Speaking before training in Annanough on Tuesday night, Jane and Anna outlined their thoughts on the side’s pre-season preparations and the upcoming national league fixtures.

Laois face stiff competition from opponents like last year’s winners Tyrone, Kerry and Armagh – who all play in the senior championship competition.

“I suppose you always have to remain positive going into the league,” said Jane.

“Playing in Division 2 is going to be a challenge. The likes of Tyrone and Armagh will be very tough, especially with Tyrone having the momentum of winning the league last year.”

From the Laois team that won the Leinster intermediate title last summer, there are a number of absentees.

However both captains are looking to focus on the positives in the camp – including the return of Ellen Healy.

Jane said: “Coming up against them will be tough but we’re positive ahead winning the Leinster final last year. We’ve new girls in who are bringing more enthusiasm into the camp this year.

“Obviously the likes of Mags and Clare Conlon and girls like that have been stalwarts for a few years but then you have the likes of say Ellen Healy coming back in, who has huge experience and brilliant talent.”

“Even then I always forget the likes of how young Emma Lawlor and Erone Fitzpatrick are and they have really stepped up to the mark, you’d think they’ve been playing at this level for years. They’re just wise beyond their years so that’s a positive as well.”

Anna added: “It’s nice to have some fresh faces coming in with different takes on things.”

The University of Limerick student spoke about the new setup and preparations so far.

“There’s a completely new setup this year so it’s an opportunity to kind of get used to playing with each other as well under new management and a new panel.

“I think definitely as Jane said it’s going to be a challenge, and there’s Kerry coming down from division one.

“We got going with training before Christmas to get a bit of conditioning and gym work under the belt and now we’re on the pitch, getting a few challenge games in. Like that, it’s just about getting used to each other and it’s going well so far.

“At least the first game is at home so hopefully we get a bit of support and get a win under the belt and get going,” Anna concluded.

Laois’s campaign begins at home against Armagh on Sunday, February 3.

You can find all the fixtures here.