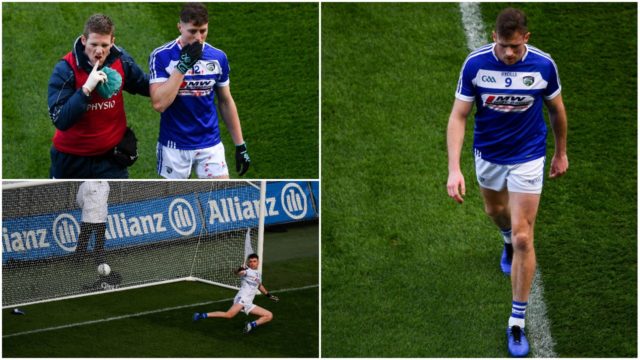 The Laois senior footballers lost for the first time in the league under manager John Sugrue in Croke Park this afternoon.

The O’Moore men won every game in Division 4 last year and began Division 3 with a win over Down last week.

But Louth became the side to end manager John Sugrue’s eight game league winning run and here we will look at some of the main talking points from the game.

actually started well with Ross Munnelly scoring a free and a mark in the opening minutes but it was all downhill after Ryan Burns opened Louth’s account from a free.

Between the seventh and the 14th minute, Louth would rattle Graham Brody’s net on three occasions. The Portlaoise man was nominated for an All-Star last year for his heroics in the goals at times last year but there was nothing he could do about the clinical nature of Louth’s attacking in the early stages.

Manager John Sugrue will undoubtedly be worried with the way his side were carved open in the first 15 minutes but this is something we saw last year too – the difference being that most teams struggled to find a way past the brilliance of Brody.

After conceding three goals in the first half, the last thing Laois needed to do was have a man sent off. This was something that happened a lot when Laois were in Division 3 in 2017 and it happened again today.

Midfielder Kieran Lillis became involved with Louth full forward Sam Mulroy in an incident off the ball which left the Louth man on the ground. Nobody seemed to have seen what actually happened but after booking Mulroy, referee Barry Tiernan produced a red card for Lillis.

The knock-on effect for Laois now is that they will be without the Portlaoise man for the game against Sligo next weekend.

Laois scored 1-9 in total against Louth but only two of those scores came from play.

Veteran Ross Munnelly scored 1-6, all bar one point of it from placed balls with half time substitute Donie Kingston getting the other. A lot of the failure to score from play can be put down to playing with a man less for so long but it is certainly a habit Laois will not want to get into.

For the second week in a row, manager Sugrue chose to leave the experienced duo of Donie Kingston and Colm Begley on the bench while he also rested Evan O’Carroll who had played three games in 10 days for county and college.

Begley was on midway through the first half while Donie Kingston and O’Carroll were introduced at half time but the damage was already done by then. We’d expect all three to start against Sligo next weekend.

5 – Ross Munnelly still has it

Ross Munnelly turned 36 at the end of last year but you wouldn’t think it with the way he raced around Croke Park all afternoon.

The Arles-Kilcruise man showed for every ball and was Laois’s main threat – kicking 1-6. He tired as the game went on but he more than demonstrated that he is worthy of a place in the Laois squad.

Manager Sugrue gave second starts of the season to Adam Campion, David Seale, Sean Byrne and Colm Murphy today. Byrne’s lasted less than ten seconds as he was injured straight from the throw in.

He was replaced by Martin Scully, for his first appearance, but the Ballyroan-Abbey man’s day lasted less than 25 minutes as he was replaced by Colm Begley shortly after Kieran Lillis was sent off as Laois needed to reshuffle.

O’Dempsey’s teenager Mark Barry got his first taste of inter-county football when he was introduced for Ross Munnelly for the last 15 minutes and he showed glimpses of what he is capable of – playing a key role in a late goal chance for Paul Kingston.

As has been well spoken about by now, this should have been a home game for Laois but they were forced to go to Croke Park after being adjudged to have broken training rules last year.

And not only did they punish the players, they also decided to punish the journalists too. One of the perks of going to Croke Park is that at half time, you get served with soup, sandwiches and tea.

We got the tea – but the soup and sandwiches were withheld from us. An absolute outrage!

And in more Croke Park bashing, there really was nobody at the game. From our vantage point above the Hogan Stand, the Hill and Canal End were completely empty while around 100 people were in the Cusack Stand.

It made for a peculiar atmosphere where you could actually hear the players talking to each other on the pitch.

Laois now play Sligo at home next Sunday at 2pm. Carlow and Westmeath drew which means they currently sit top on 3 points with Laois and Louth behind them on two.

But that will all change tomorrow when Down face Sligo and Longford take on Offaly.