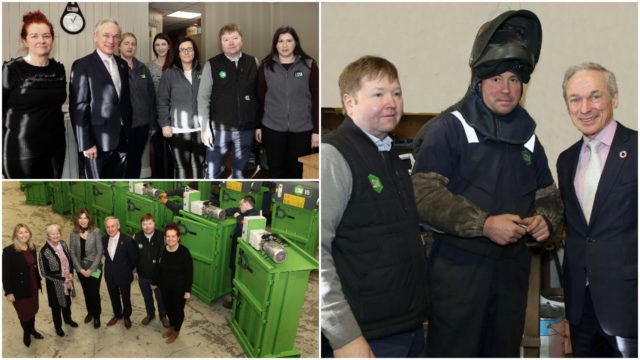 Laois was showered with Government ministers yesterday as they launched new plans and announced new jobs for the county.

And one of them, Richard Bruton, Minister for Communications, Climate Action and Environment, took time out to visit a local Laois company that specialises in manufacturing recycling equipment.

Established in 1997, LSM is an independent Irish company that provides industry-leading waste solutions to customers and distributors around the globe.

All LSM machines are designed and manufactured at their facility in Portlaoise – which is where Mr Bruton visited.

Speaking to LaoisToday about the visit, Operations manager Noel Graham, who owns the company along with John Cummins, said it was a very worthwhile experience.

He said: “The Minister was in the area and Cllr Mary Sweeney contacted us to see if we would be interested in giving him a tour of our factory to show him what we do.

“She facilitated the whole thing and Minister Bruton was very interested in what we do here as it is in his field.”

LSM employees 35 people and has been in business for over 20 years.

They have contracts with multi-national companies like Tesco, Glanbia and Statoil and are well established as a leading company in their field.

Noel said: “The Minister was given a full tour of the factory and was shown how we manufacture all of the products that we produce.

“I’m sure it was a worthwhile experience for Minister Bruton, Cllr Mary Sweeney and Fine Gael’s Thomasina Connell who were also in attendance.”

Photographer Michael Scully was there and he captured some great pictures.