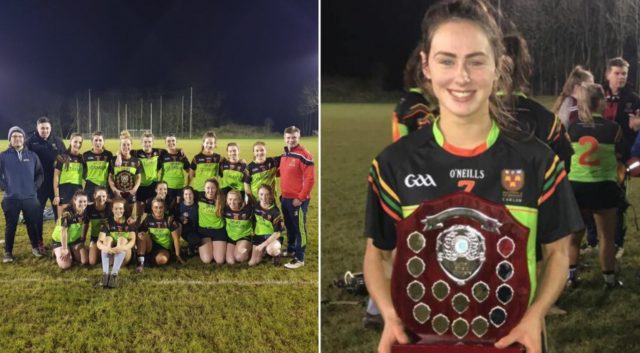 Last night IT Carlow’s camogie team were helped in winning the Purcell Shield over the Garda College by Camross woman Sara Cuddy.

Sara, lining out in the half-back line, helped her college to secure a 1-7 to 1-6 win in the division 2 college camogie championship.

Garda College led by three points after eight minutes on a scoreline of 1-1 to one point.

IT Carlow cut the deficit back to two points before Garda College pushed ahead on the stroke of half-time leading 1-4 to 0-3.

A comeback was needed and it came. A last minute goal from a long range free saw IT Carlow go one point up with 63 minutes on the clock.

After a tense and thrilling end to the game, IT Carlow walked away as Shield victors 1-7 to 1-6.

Sara is in her second year of college in IT Carlow and received a sports scholarship from the college before Christmas.